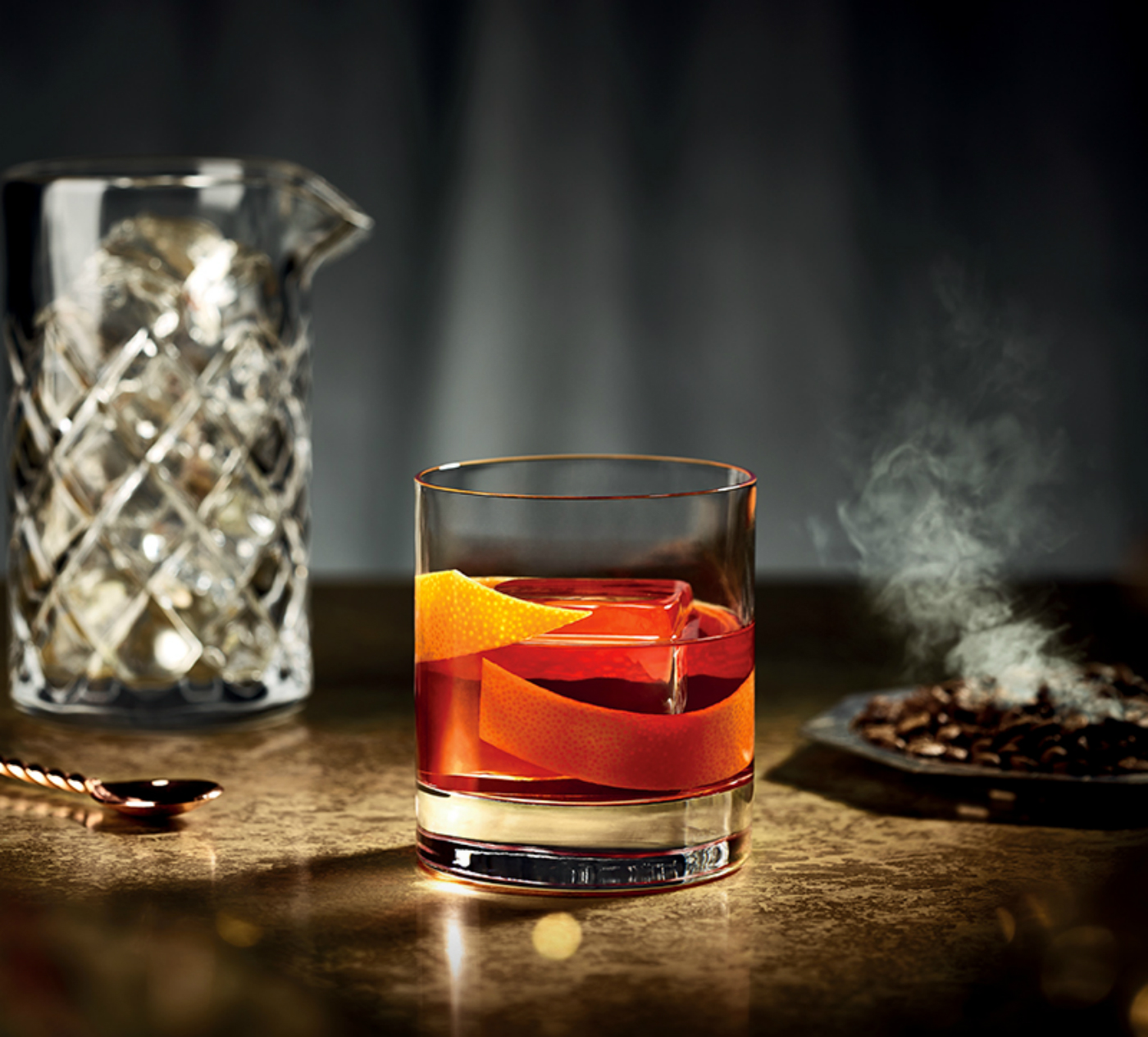 Seamus Harris traces the history of The Negroni, the classic Campari-based aperitif cocktail.

Italy has a genius for edgy style. Think gleaming stilettos on cobbled streets, Vespas delivering chocolate-eyed blondes to curbside cafes, and irritatingly good-looking men slicing up the countryside in Ferraris. The Italian look demands that you stand out from the crowd – forcing Italians to stand out just to blend in. We may envy them, but the poor chaps don’t have it easy. This all sounds very oxymoronic, but crack a bottle of Campari and the enigma should start to unravel.

Edgy yet mixable, Campari is la dolce vita distilled, bittered, and served up in lurid red. Campari is the ultimate aperitivo. The seductive colour and beguiling scent make a first sip irresistible. Bitter-sweet orange and resinous pine first tease then fill your mouth, only to give way to a jarring bitterness. You feel tricked, yet somehow cannot resist a second sip. Then you take another, each sip becoming more mellow as the bitterness mysteriously recedes and new layers of flavour appear.

The Italians like the stuff neat or with soda, but Campari purrs loudest when tamed in a cocktail. Vermouth is its natural partner here. The simplest marriage of Campari and vermouth is the Americano, an equal-parts mix, refreshingly iced, and spritzed with soda. Around since the 19th Century, the drink supposedly picked up its name when adopted by American tourists visiting Italy. There could be some truth to the tale. After the American Civil War, Americans were crazy for vermouth-based cocktails. Of course vermouth originated from Italy and therefore it would make sense for American tourists, after dropping by the Uffizi to digest a little culture, to have settled down to the far more serious business of trawling bars in search of some vermouth.

Need something to soothe the nerves after ordering that pesky kid to be whacked? Time for a Negroni.

Light on alcohol yet heavy on flavour, the Americano is ideal for contemplative and unhurried occasions – a well-mannered and cultured drink with an appealing old-world charm. On the other hand, the Negroni is a sort of high-octane, testosterone-charged, palate-smacking, bad-boy nephew of the Americano. The story behind the drink revolves around one Count Camillo Negroni. The illustrious Count spent much of his life in the United States and appears to have been more cowboy, card shark, drinker and raconteur than genuine member of European high society. If the Count belonged to the Negroni family at all, he was surely one of its black sheep. Supposedly, the Count asked a Florence bartender to spike his Americano with gin and hold the soda. The request was an inspired one, and before long others were asking for their Americanos “Negroni-style”.

The invention of a most dubious adventurer, the Negroni represents a daring achievement thoroughly deserving of its popularity. This cocktail offers a rugged, aromatic, bitter-sweet marriage of bitters, vermouth and gin that simultaneously sedates frayed nerves and provides a jarring wake-up call to the most jaded palate. One of the great traditional cocktails, the Negroni is about rough-and-tumble, a testarossa-red smack-down to pallid-pink newcomers like the Cosmo.

Tellingly, the Negroni is a favourite among bartenders the world over. Not only is the Negroni a drink that bartenders favour when they find themselves on the customer’s side of the stick, it is also perfectly suited to experimentation, and new variations keep appearing.

The history of The Negroni

In the late 18th century, Turin, Italy witnesses the birth of modern vermouth, and hence the aperitif. White wine is infused with more than 30 herbs and spices, and sugar and spirits are added to sweeten and stabilize the result. Spiking wine with herbs was nothing new, but vermouth refined and popularized the drink. Promoted as a light alternative to the heavy local red wines, the new drink was said to have tonic properties, and to be suitable for ladies.

[dropcap type=”background”]1828[/dropcap] Gaspare Campari is born in Cassolnovo, Lombardy. An early bloomer, by the age of 14 he was working in a Turin bar as a maitre licoriste – or master drink maker. Turin was the centre for aperitif production in Italy, and local bars would employ drink makers to manufacture unique house liqueurs and bitters. His job allowed Gaspare to develop the formula for Campari, and by his 20s he had left the bar and was selling his aperitif bitters throughout Italy.

[dropcap type=”background”]1860s[/dropcap] Gaspare Campari moves his business empire to Milan. In 1860 he establishes the Gruppo Campari, and in 1867 establishes the Caffé Campari (Il Camparino). The caffé becomes a centre for Milanese social life, and naturally serves drinks based on Campari. One such drink is the Milano-Torino, or Torino-Milano, depending on who you ask. The drink is so named because it mixes Campari from Milan with vermouth or aperitif bitters from Turin. Soda is optional in the Milano-Torino, but mostly it resembles a prototype Americano.

[dropcap type=”background”]1900s[/dropcap] Sometime during the late 19th or early 20th Century the Milano-Torino is reborn as the Americano. Evidence is flimsy, but the story goes that Campari, sweet vermouth and soda became popular among American tourists visiting Italy, leading locals to affectionately name the drink after the Americans.

[dropcap type=”background”]1919 [/dropcap] “Count” Camillo Negroni allegedly invents the Negroni, by asking a Florence bartender to hold the soda and instead fortify his Americano with gin.

[dropcap type=”background”]1920s-1930s[/dropcap] The Negroni formula is played around with right from its inception. Harry McElhone’s Harry’s ABC of Cocktails (1922) lists the Old Pal, essentially a Negroni in which rye whiskey replaces the gin, and French Vermouth subs for Italian. A subsequent book Barflies & Cocktails (1927) presents the Boulevardier Cocktail, comprising equal parts Campari, Italian Vermouth and Bourbon.

[dropcap type=”background”]1947[/dropcap] Orson Welles, reporting from Rome for the Coshocton Tribune, makes the first written reference to the Negroni. Always perceptive, he notes: “The bitters are excellent for your liver, the gin is bad for you. They balance each other.”

[dropcap type=”background”]1970s[/dropcap] The Negroni Sbagliato, or “mistake” Negroni appears. This is ostensibly yet another Negroni variation, produced when a bartender mistakenly substituted dry prosecco for the gin. However, perhaps this one is best thought of as a deluxe Americano?

[dropcap type=”background”]2000s[/dropcap] The Negroni is revived by bartenders celebrating the classics, but the revival leads to ever more variations on the basic formula. The Chocolate Negroni for example gives the basic drink a bittersweet chocolate edge with a dash of crème de cacao.