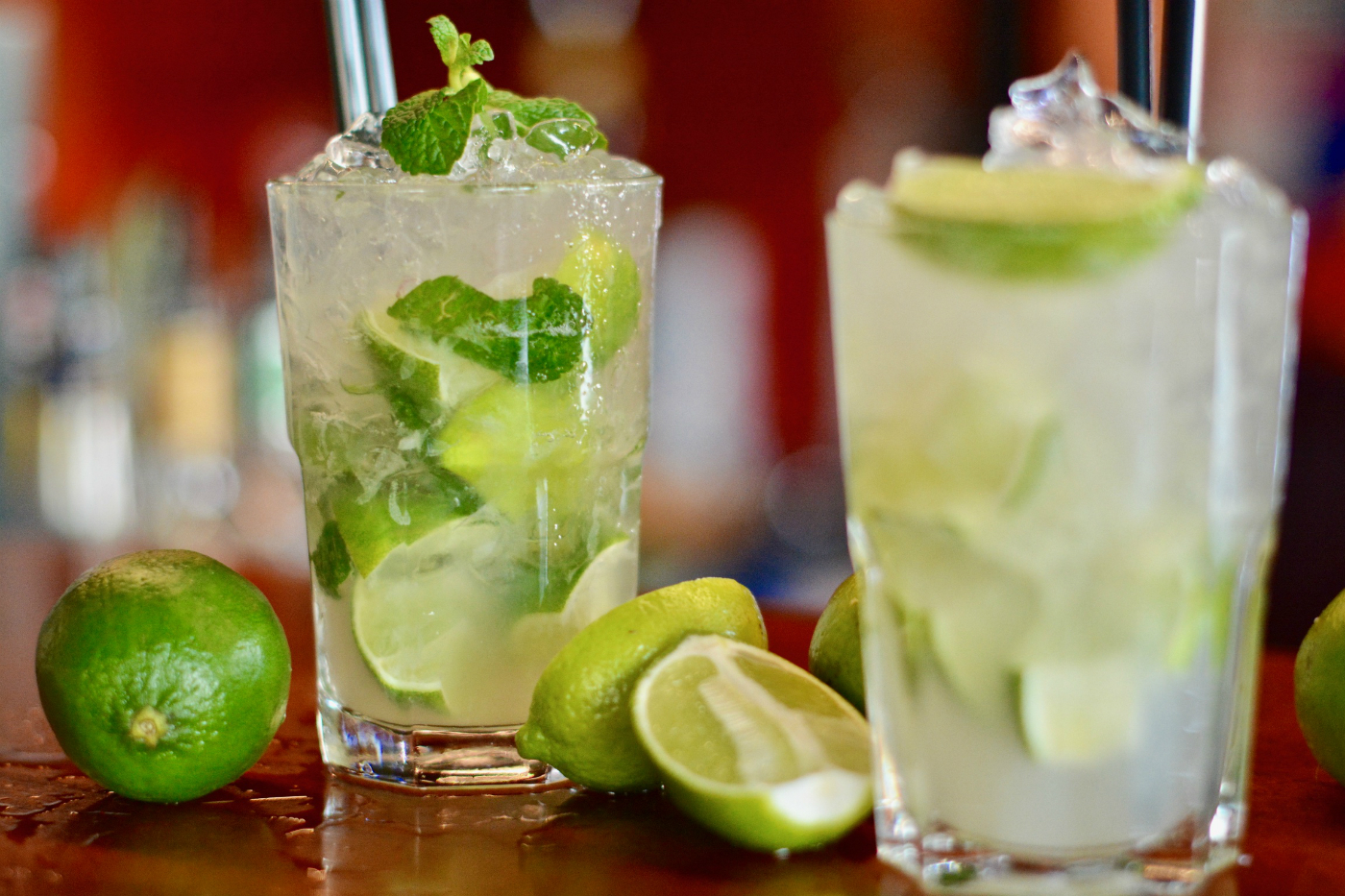 Rum-runners created Cuba’s most famous cocktail, but revolutionaries forced it to travel. By Seamus Harris.

One of the most popular cocktails of recent years, despite its current trendiness, the Mojito harks back to an earlier age. The drink was born in the romantic lost world of pre-revolutionary Cuba, some would say even earlier. Imagine parties at elegant hotels on balmy evenings, vintage cars, linen suits, languid ceiling fans, soft Cuban jazz, swaying palms, the faint perfume of a fine cigar smoked somewhere in the darkness, and the gentle music of the Caribbean shoreline. Now people this scene with characters like Ernest Hemmingway, Al Capone, Marilyn Monroe, Frank Sinatra and a young Fidel Castro. Perhaps allow the ghost of Sir Francis Drake to lurk in the shadows. Sensory overload? Better mix a Mojito and read on.

The precise origins of the Mojito are murky, but many believe it originated from the Draque, allegedly an old pirate drink involving rum, sugar, limes and mint. The English pirate Sir Francis Drake, known to the Spaniards as El Draque (the Dragon), is credited with its invention. Drake did visit Cuba. But assessed using the conventional piratical metric of looting and vandalizing, his time there appears suspiciously unproductive, so maybe he was busy partying. Whatever its origins, the Draque was popular in Cuba by the early 19th Century.

The Mojito probably developed in the late 19th Century, as a Draque-like concoction made with the newly invented light style of Cuban rum, plus the sensible addition of ice and soda. Some say the Mojito developed as a drink of the lower classes, perhaps the slaves who worked Cuba’s sugar plantations. The precise story of how the drink developed is unclear, as is the meaning of its name. Depending on who you ask it means a cute little soul, a drop of something wet, or a tasty sauce. In any case, by the time Prohibition drove a horde of thirsty Americans down to Havana to party, the Mojito was waiting for them.

Prohibition is central to the Mojito’s story. With no legal drink to be had back home, America’s rich and famous, plus many of its infamous, made Havana their playground. Bars like El Floridita and Sloppy Joe’s achieved near mythical status. Literary legend Ernest Hemingway set up residence in the city. Mostly a Daiquiri drinker, Hemingway would try most things containing alcohol and surely gulped the occasional Mojito. Chicago gangster Al Capone owned a distillery in Havana that supplied his bootlegging operations, and attended to business from the elegant Hotel Nacional.

Havana developed such a reputation that the party continued even after Prohibition ended. Mob figures like Lucky Luciano and Meyer Lansky built gambling empires there, with a cut of the profits going to Cuba’s corrupt dictator Batista. Singer Frank Sinatra flew in to pay his respects to the Mob. The city played host to figures as diverse as Marilyn Monroe, Buster Keaton, Errol Flynn, Noel Coward, Joe DiMaggio and Graham Greene. All of them needed a drink, and as often as not the Mojito was it.

It was going to take something dramatic to end the party and Fidel Castro’s revolutionaries were happy to oblige. The Mob were run out of town, wealthy Cubans fled the country, and industries were seized in the name of the people. Hemingway doggedly remained at the bar, but the party was over. Like Castro though, the Mojito is a survivor. Not only did the drink live on in Havana, it found a new home among the Cuban exile community in Florida. As Castro slows, the Mojito looks increasingly vigorous. The light refreshing flavour matches modern tastes, and the muddling of fresh ingredients in front of the customer sees the natural foods trend meet the cocktail craze. The Mojito has become a great modern drink, but don’t miss the history in each sip.

1580s The Draque is allegedly invented by the notorious Sir Francis Drake. Whatever the Draque was, it was not a Mojito as we know it. The Caribbean rum industry did not exist in the late 16th Century. Brazil was the birthplace of distilling in the Americas, so Drake’s drink may have first been made with cachaca. Distilling arrived in the Caribbean in the 1640s, and its first home was Barbados, not Cuba.

1862 Facundo Bacardi, a Spanish immigrant, establishes the original Bacardi rum distillery in Santiago de Cuba. Facundo introduces innovative modern methods of rum production. Others soon imitate his success and the Cuban rum industry rapidly modernizes. Double distilling in column stills is combined with charcoal filtering to produce a light, smooth and pure spirit. Ageing in oak barrels and solera blending (similar to the process used for sherry) improve quality and consistency. Cubans begin referring to the new style as rum, while reserving the generic term aguradiente for spirit produced by the old methods.

1931 The first recognizably modern Mojito recipe appears in a recipe booklet from the famous Sloppy Joe’s Bar in Havana. Bacardi rum is specifically called for.

1942 La Bodeguita del Medio opens its doors and becomes a favourite among visiting celebrities. Publicists claim the bar popularized the Mojito in Havana, and name Hemmingway as a regular customer.

1959-1960 The Cuban Revolution drives a flood of Cuban exiles to the United States and results in the nationalization of many Cuban rum distilleries. Americans stop coming to Havana to drink Mojitos, but the drink gets a new home in the United States thanks to the burgeoning Cuban community in Florida.

1990s The cocktail revival, interest in using fresh ingredients, the Latin cuisine trend and the Cuban music craze see the Mojito gain universal popularity in the United States. It acquires a new identity involving muddled limes, crushed ice and shredded mint, and from the United States this new “improved” version spreads and becomes a global favourite. The drink evolves still further in fresh directions with the addition of fruits other than lime.

Rematch Beeyatch will test the speed of Hong Kong’s bartenders