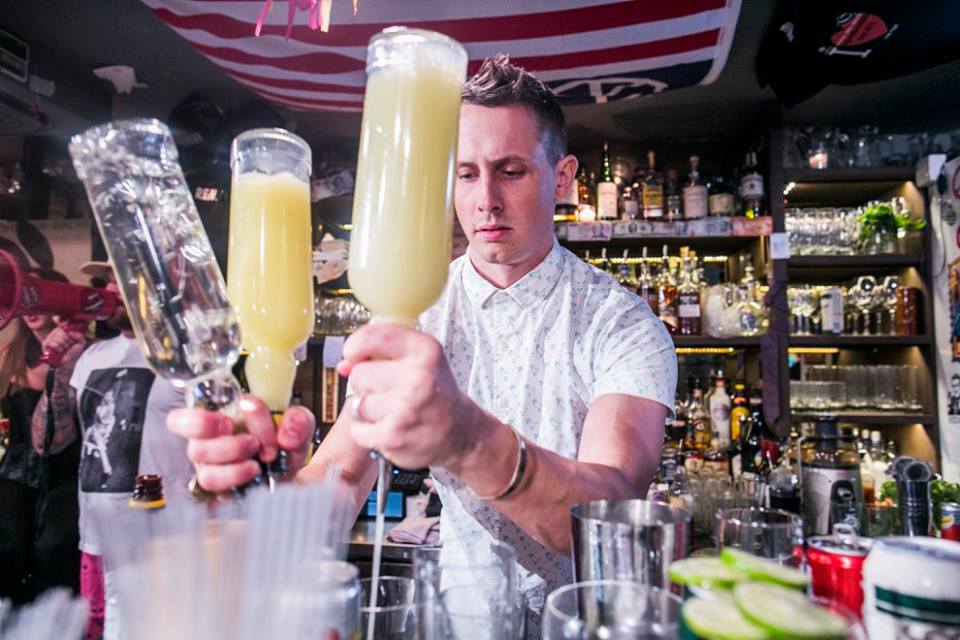 Founded in London by bartender Paul Mant, on the surface Rematch Beeyatch is a pay-in, speed tiki cocktail contest created by bartenders for bartenders. Competitors make two daiquiris and one each of a mojito, caipirinha, mai tai, Planter’s Punch, pina colada, zombie, cuba libre and a beer in one round as fast as they can. The winner is the person with the fastest time (but judges decide if the drinks are passable) and takes home all the cash.

Go a little deeper, and Hong Kong organisers John Nugent of Lily & Bloom and Owen Gibler of Employees Only Hong Kong will tell you Rematch is essentially a thinly veiled excuse for a shit-talking, booze-downing bartender bonanza.

“The general rule of thumb is if you made that drink on a very busy Friday night, would the server take it to a customer? It’s got to be presentable, have the correct ingredients and be garnished properly. It can’t be complete shit but it doesn’t have to be the Japanese standard of bartending. But it’s so much more than that,” says Gibler.

Rematch is never sponsored by brands so Gibler and Nugent hope it creates the same sense of community in its debut in Hong Kong that it has around the rest of the world. It’s also the competitions second time in Asia, after a run in Singapore in 2016. “We encourage brand donations,” says Nugent, “but stress to them that they won’t get any love. They’re essentially anonymous donors to a charity. It seems every competition these days is sponsored by a brand with a hidden agenda. But this is about highlighting bartenders and their skills, especially as speed is such an important facet of the job.”

The pair want the competition to recreate the magic, fun and party vibe of the original and involve the local bartending community as much as possible without creating too much pressure on anyone. “There’s no divide between the Western and local bartenders in Hong Kong, but as a result of Rematch, we hope there’s more collaboration between the two going forward,” says Gibler. “We’re doing something that’s just for fun and money. It’s to open everyone’s eyes to the fact that competitions can be more than just brands. Rematch is like our holiday party, we’re in it for us and there’s bragging rights and money to be had. It’s bartenders being awesome!”

Dalmore sets new record for most expensive bottle of Scotch

Get to know: Mojito