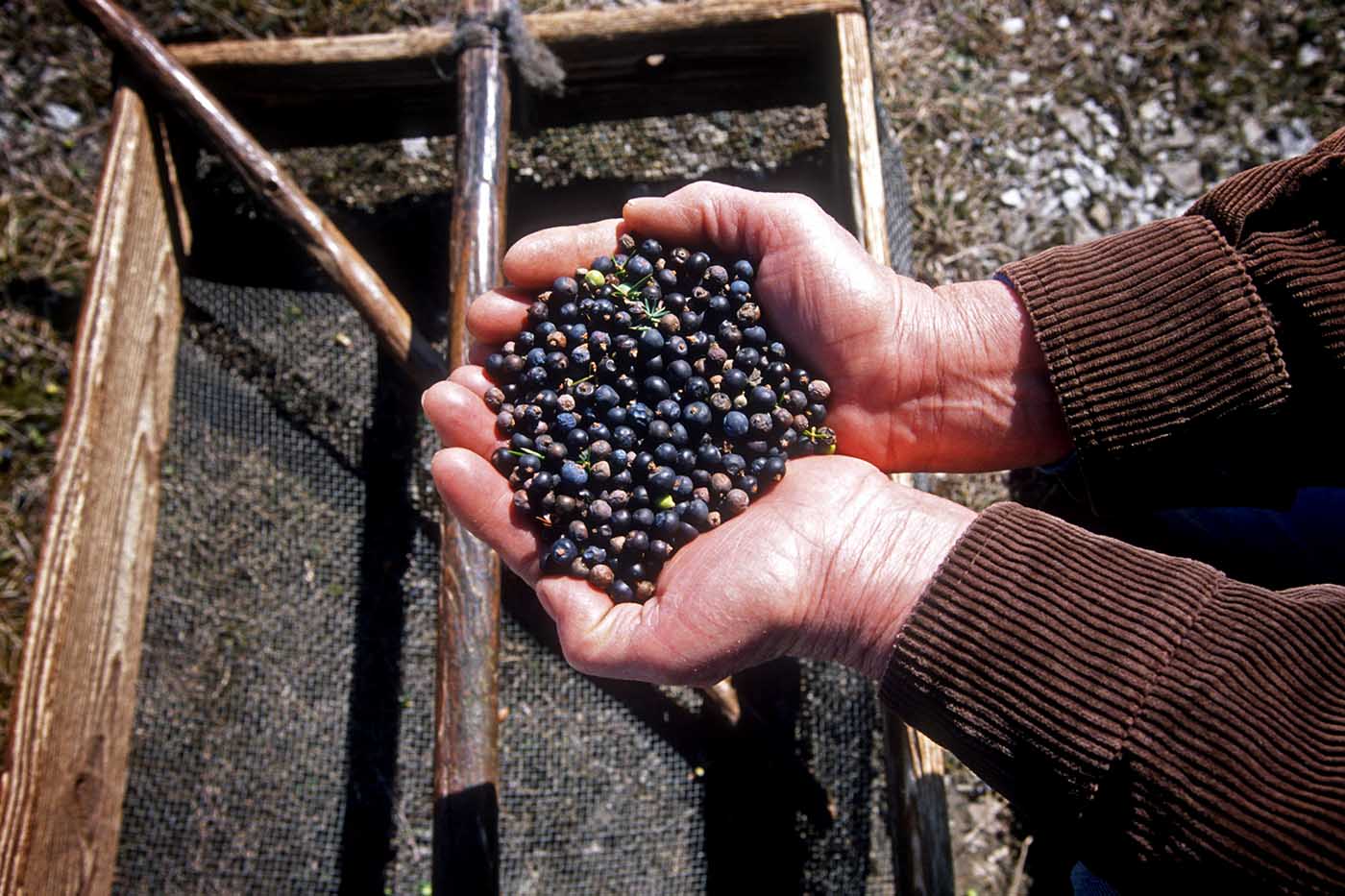 Freshly harvested juniper berries for use in making gin in Tuscany
September 15, 2017
share

We get most of our juniper berries from Tuscany and Umbria in Italy, but it grows all over the place. I have seen it in Iceland and Chicago. What gin distillers look for, however, is the oil content, and you get better oil content in warmer climates. Ours isn’t exclusively Italian, but the trade routes from Italy are well established, from over 500 years ago when juniper was being traded for medicinal qualities.

Ordinary people go out to forage. They might also find porcini or if they’re lucky truffles. It’s the same terrain. I’m worried that the next generation of these families won’t want to pick juniper anymore. But it’s not a bad living. Pick something wild for free and then sell it for money. The type we want is juniperis communis. The bushes produce green berries first, and one year later these ripen to dark blue and purple. So the growing period is two years – nothing is easy with juniper. The foragers hit the tree to shake the ripe berries off. They can’t cut it as that would ruin the growth for next year and stop those green berries maturing. They then sift it to get rid of needles and twigs. An elderly guy told me that he can collect 250kg, five bags, in each season. We need about 50 tonnes for the year.

The foragers sell to a cooperative or to a negociant. The berries are then dried, but not fully dehydrated, to drive off surface moisture and stop them rotting. Then the merchant sorts them for size and colour. Gin distillers want the top grade, and I’ve been told the smaller ones get sold for bird feed! The harvest starts from September onwards, and then four or five merchants will send us samples. We end up with about 200. Every December we hold what I call “the big juniper sniff” to choose which ones we want to buy. We crush and smell them – not very scientific – and then distil them in the lab to collect the oil. We put these oils in neutral alcohol and then find the right blend to keep our gin the same each year.

Last year was a bad harvest. Maybe the plants just had more green berries, but it was also caused by the earthquakes in Italy – a lot of the roads in the country were simply gone.

Can it be cultivated? Every time I’ve asked the foragers this questions they’ve told me about a special fungus that grows only in that area which helps set the berries. I don’t believe them. But when I push, suddenly the hunting rifles get put on the table and they say, “Lets go for lunch.” But the fact it’s wild lends a certain charm as well as a certain frustration. If gin makers started using cultivated juniper, I can hear the conversations already: “Of course, gin isn’t as good as it used to be.” The thing is, it’s genuine; people say gin is industrial, compared to cognac or something, but it’s simply not true.

Is it time to rethink gin’s classifications?