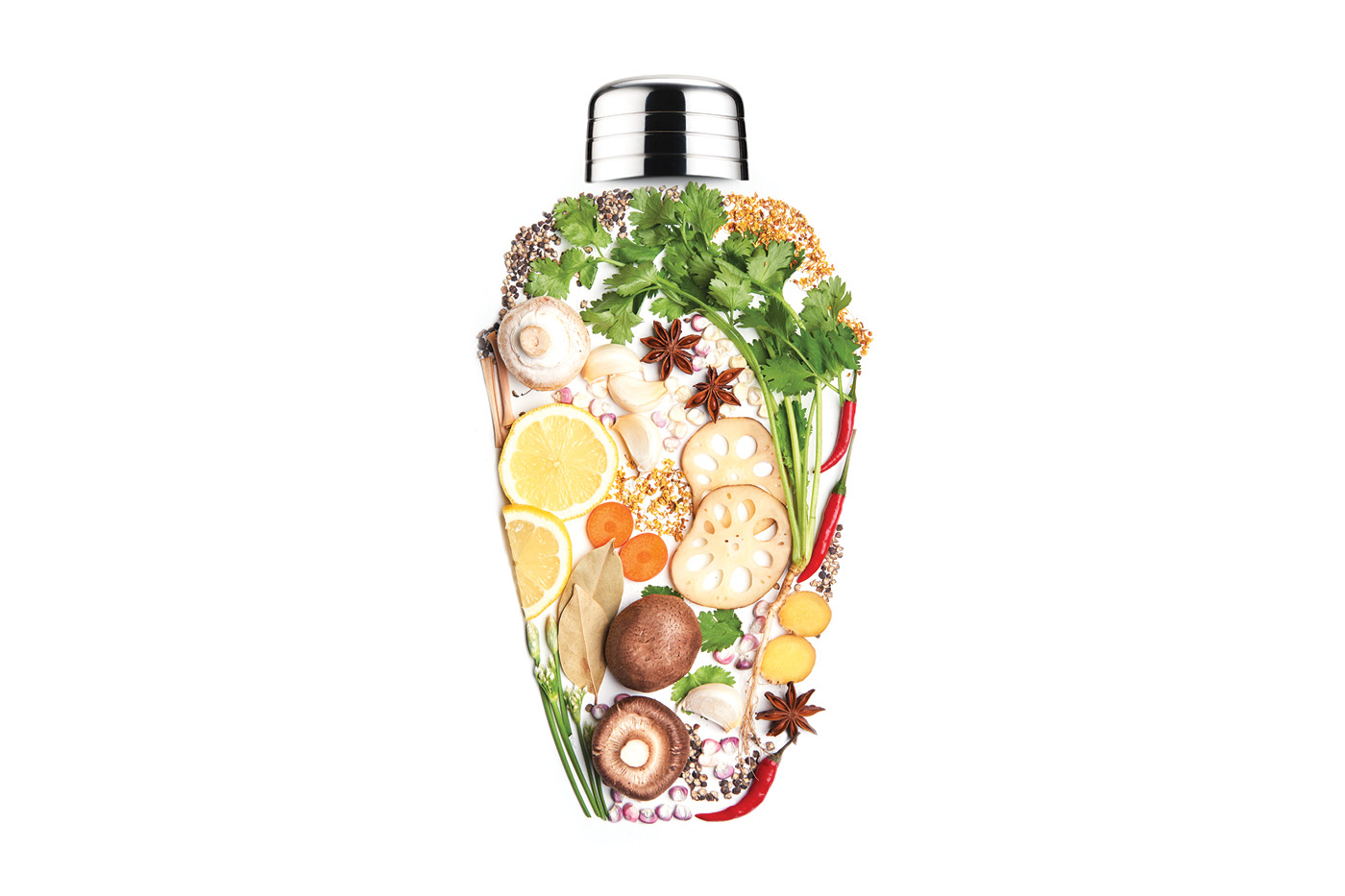 Making cocktails for your vegan customers isn’t just about skipping the egg whites in a sour, or milk in your White Russians, discovers the DRiNK Magazine columnist and bar consultant.

I approach this piece with trepidation. Not for the difficulties of preparing a vegan offering, nor because I’m a staunch carnivore (I eat meat, but am equally happy on a plant-based diet, particularly if it comes out of the garnish tray), it’s more for the response that mentioning certain types of diet can elicit. Dietary articles, websites and forums tend to be full of impassioned debate, and even a social media post to say I was writing about vegan drinking got some sharper responses than was perhaps necessary (from non-vegans in this instance).

So before I open a potential floodgate of comments, let me lay out my reasoning for encouraging you to think vegan. As bartenders, we are in the service industry: we ensure our guests have a good night, get a drink that suits them, and get home safely. Engaging in casual banter, chit-chat and sharing enough (but not too much) of our substantial drinks knowledge is also part and parcel, but when it comes to commenting on people’s lifestyle choices, I tend to steer clear. I know bartenders who roll their eyes, raise an eyebrow, or mutter into their ice-wells at a certain dietary request. I know bartenders who do that if someone orders a bourbon and coke for that matter, but I would suggest the opposite approach.

A good bartender is always looking for ways to improve, things to learn and different ways to impress a guest, so let’s take this as a challenge, and if you haven’t considered that aspect of your drinks before, take a second look at your back bar with green-tinted spectacles.

To be vegan is to eschew any animal products for ethical, environmental, health or religious reasons, and it is becoming more and more popular, particularly with those that see a plant-based diet as a healthy lifestyle alternative that has less impact on the environment. Where veganism was once the preserve of a tiny minority, its popularity is growing in the same way we have seen with gluten-free and dairy-free diets hitting the mainstream. One survey found a 360 per cent increase in the number of vegans in the UK over the last 10 years (to approximately 500,000 people), while other estimates have 2 per cent of the US and 4-5 per cent of the Israeli population (the highest rates in the world) identifying themselves as vegan.

A plant-based diet (a more fashionable term) might seem straightforward – dairy is out (so no White Russians, Buttered Rums or Alexanders, nor classic cream liqueurs); eggs, out (bye to all the Sours, flips and definitely the Ramos Gin Fizz), and that bacon fat-washed bourbon – clearly out. Clamato juice in a Bloody Caesar, definitely out (thank goodness), but the Bloody Mary in its standard form is out too, as Worcestershire sauce contains anchovies.

A good bartender is always looking for ways to improve, things to learn and different ways to impress a guest

After that it starts to get slightly more complicated. Many beers and wines, including barrel-aged ports, sakes and the wines that go in to vermouths are filtered and clarified using isinglass finings (made from fish bladders) and gelatine (derived from animal collagen), so that’s the Martini, Manhattan, Boulevardier and a whole host of other classics that need rethinking (although some vermouths such as Dolin do state they’re vegan). While Campari is often mentioned as its red colouring coming from cochineal (an insect extract), Paolo Tonellotto, UK Italian Spirit brand ambassador for Campari Group points out that it was replaced with a vegan alternative in 2006, so it’s just the vermouth component that might exclude the Negroni from your recommendations.

Looking at more niche ingredients, there are a few mezcals that are made with meat added to the still (pechuga styles with chicken breast for example), while some liqueurs such as Benedictine use honey (yup, that’s out too), and there are baijiu brands that rest the spirit in traditional vats sealed with a paste made from blood and egg whites. There’s even a British gin distilled with ants (for that hint of formic acid)! Those are relatively straightforward to avoid, but in the case of strict veganism, spirits that have been aged in casks that once contained clarified products are out too, so whiskies with a sherry, port or wine barrel component would be unacceptable (while bourbon, with its use of new barrels, and those spirits such as tequila or rum that predominantly age using ex-bourbon barrels, wouldn’t have any problems).

Once your research is done (and if you want to be thorough, websites like Barnivore.com list a huge range of brands and whether or not they’re vegan), what can you do to tailor your drink to impress your vegan guests? Declan McGurk, bar manager of The Savoy’s American Bar, says they have a daily hotel meeting to review dietary requirements of their guests. “We have to stock soya and almond milk as dairy alternatives and all guests are informed about the anchovy-stuffed olives that are offered with the drinks. Casper’s restaurant in The Savoy has a separate vegan menu too, but there isn’t as much pressure at the bar, and we don’t currently have an egg white alternative.”

Tim Etherington-Judge, one of Diageo’s international brand ambassadors and vegan himself offers up a few alternatives there though: “While I’m quite happy to have a sour without egg white, we’re seeing an increase in replacements, particularly in markets where there are higher rates of vegetarianism and veganism such as India, Israel and the US, which leads the way in plant-based diets. Chickpea water, or aquafaba (a term specially created for it), is one of those, but there are also egg replacement products being developed in the USA by the likes of Hampton Creek that are shelf-stable and vegan.” Oscar Stephenson from Demon & Wise in London is another vegan bartender who has experimented with replacements, suggesting Versawhip and soy lecithin as other alternatives for creating a stable foam.

The advantage of these products is that they are much easier to handle than egg white, and have a longer shelf life. According to Jack Wareing at Dandelyan in London, with aquafaba “there’s a lot less waste than with egg white. We use a third less to start with, and it’s essentially a waste product from the kitchen anyway”. He uses a relatively small amount in the Papa Popeye recipe given here, finding it gives a good texture, though the foam is shorter-lived. “We played around with blending the whole can in a Thermomix, but the problem is that the shelf life halves and you have to make it every day which defeats the point of using it to reduce waste. We also found that the finer we strain it the less head we get, so we just strain canned chickpeas through a muslin. The more you mess with it the less it gets.”

It’s probably fair to say that the drinks industry is a little behind the restaurant world when it comes to catering for vegans, but it’s a growing market and one that’s being taken seriously.

Ulric Voelkel-Nijs, a consultant who has recently been experimenting with aquafaba in his sours, recommends cooking dried chickpeas yourself and straining the water for a better effect, while Matt Whiley from London’s Peg & Patriot prefers to centrifuge tinned aquafaba to separate any solids, so it’s clear that there isn’t yet a definitive method and it might be best to see which technique works best for each drink.

Aroma is another similarity that aquafaba has with eggs in sours – both can leave an unpleasant note, particularly as they settle. Whiley considers the bean smell preferable to, or at least less bad than, that of eggs: “I find that egg white in drinks when it gets warm makes the drink smell. We have used it with scotch, bourbon and gin and find its stability is very similar to egg white, but without the smell. I actually prefer it to egg white and am considering using it full time [especially as] we are about start frying the chickpeas for a bar snack.”

Others disagree though, with Voelkel-Nijs describing the flavour as funky. “While I initially loved the idea of aquafaba, I found that the underlying flavour was hard to control as a straight replacement to egg white… and I haven’t got the silky character. I have the look; but not the mouthfeel, especially as the drink finishes.” Wareing is even less of a fan of the aroma: “I find the smell akin to corned beef or cat food, so we use [aromatic oils] as something akin to a citrus twist.” In his recipe, he uses very aromatic spinach and toasted almond oils that not only mask, but work well with the vegetal bean flavours, giving a very refreshing drink that truly lives up to its plant-based aims.

It’s probably fair to say that the drinks industry is a little behind the restaurant world when it comes to catering for vegans, but it’s a growing market and one that’s being taken seriously. Diageo recently launched the hugely successful dairy-free Baileys Almande liqueur made with almond milk, but vegan consumers were disappointed to find it contained beeswax, so the brand is currently being reformulated to appeal to a wider audience. (Update: Baileys Almande is now really vegan-friendly – link.) Guinness is also going vegan this year, and no doubt more wines, beers and vermouths will follow suit.

Whether or not you see vegan drinking as a big part of your market, the act of researching your ingredients is an important one, as is consideration for whoever might walk through the doors. If it so happens that it helps us to develop better drinks or more sustainable working practises, then all the better for it.

This story was first published in Issue 04 of DRiNK Magazine’s Asia edition. Click here to subscribe to the magazine.