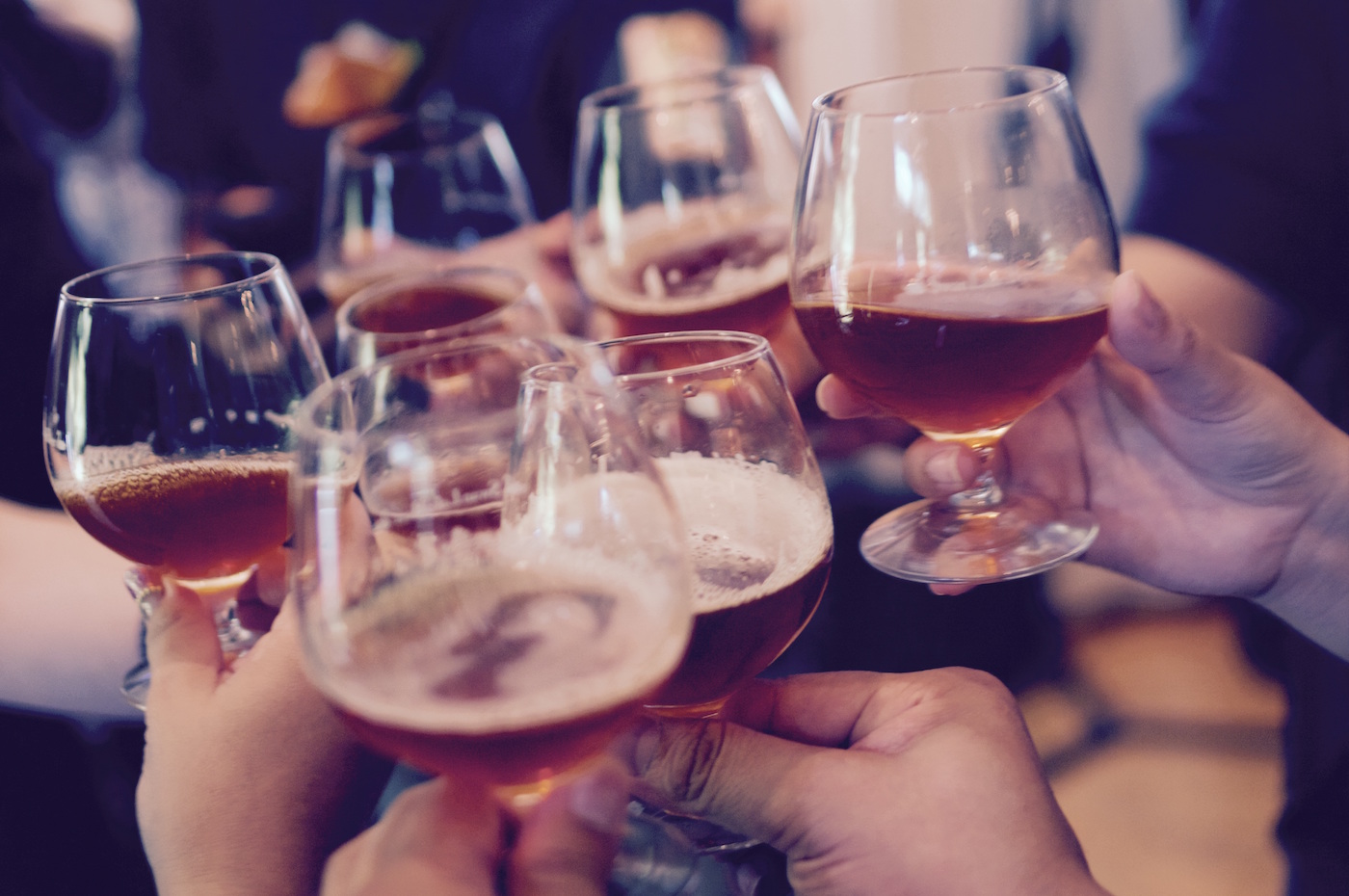 An essential round-up of must-know terminology from the ever-geeky craft-beer lexicon.

1. What is the “wort”?
A fairly simple term, “wort” refers to the sweet liquid that brewers create after malted barley is “mashed” – meaning, slowly steeped in hot water – and boiled with hops. Wort becomes beer after yeast is added – a step known as “pitching” – and fermentation takes place.

2. When is a finish “well-attenuated”?
You may or may not have heard a beer described as having a “well-attenuated” finish – but what does that mean, exactly? Well, put simply, it refers to a beer that finishes crisp and dry with very little or no residual sugar sweetness. Attenuation, at least in brewing, measures the conversion of sugars into alcohol and carbon dioxide that takes place in the fermentation process. Yeast can attenuate up to 85 per cent of sugars with a standard range of between 65-85 per cent (each variety of commercial yeast will have its own “attenuation range”). A dry beer, then, comes from what can be described as a “well-attenuated” fermentation of, say, 80 per cent – meaning the yeast has successfully converted 80 per cent of the sugar in the wort into alcohol.

3. What is a “high-gravity” beer?
This term, too, relates, in part, to the beer’s fermentation process. In order to calculate a beer’s attenuation – necessary to assess whether fermentation is complete – a brewer needs to work out the change in density of the wort before and after fermentation – referred to as “specific gravity”. Sugars are consumed by yeast in the fermentation process that produce alcohol and change the “specific gravity” – in other words, the density – of the wort. The specific gravity of the liquid before fermentation is called “original gravity”; after fermentation, it’s called “final gravity” – the greater the difference between the two, the more alcohol that has been produced, the better the attenuation. So, put simply, a beer with a higher original gravity – known, of course, as “high-gravity” beer – refers to a wort with a high sugar content which leads to a higher concentration of alcohol in the finished beer: more sugar equals more alcohol.

4. What does “bottled conditioned” mean?
Brewers carbonate beer in one of two ways: artificially, by a process known as “force carbonation”, where carbon dioxide is added to the brewer’s brite tank; or naturally, via a process known as “bottled conditioning”. This approach requires adding a dose of sugar – and sometimes yeast – to the fermented beer just before its bottled. This begins a “secondary fermentation” – as with the primary fermentation, yeast turns sugar into alcohol and carbon dioxide that results in a lively, natural carbonation. A by-product of this process is a collection of dormant yeast at the bottom of the bottle known as “lees” – although harmless, some drinkers take care to avoid pouring the lees into a glass as they can offset the balance of a delicate beer.

5. What is a “dry hopped” beer?
Dry hopping is a process of adding hops to a beer after fermentation to increase the hop profile without increasing bitterness. Since the hops are not boiled they don’t release their green, bitter alpha acids. Instead, they release flavourful, aromatic oils that give the beer an added layer of hoppy aromatics (normally lost in the boiling process). Depending on the brewer, dry hopping usually lasts around three days is most commonly used to produce hop-forward styles such as IPAs and pale ales.

6. What are “noble hops?”
While there are hundreds of modern strains of hops available to brewers today, only four continental European varieties are considered “noble hops”. Low in alpha bittering acids, high in earthen aromatics, they are considered aromatic, not bittering, hops. Three are from Germany: hallertau, the original German lager hop, named after a region in Bavaria, floral and earthen with very mild spice, usually used in lagers; tettnang, known for its soft bitterness, mild spices and floral character, used in Belgian ales, French ales, bocks, lagers and pilsners; and spalter, the rarest variety, strong hop aromatics, used in bocks, lagers, pilsners and Munich Helles. The other is from the Czech Republic: saaz, with mild, earthy, zesty aromatics, used in lagers, pale ales and wheat beers. Hops, like grapes, show a strong sense of terroir – none of the varieties are considered truly noble unless they are grown in their namesake regions.

7. What’s a “gypsy brewer”?
Also known as “phantom brewers” or “resident brewers”, a gypsy brewer is a company that produces beer at a brewery they do not own. Many famous brands today started out as gypsy brewers until they raised the capital to buy their own breweries (Brooklyn Brewery, for example). Some of the best-loved craft beer brands are still defiantly hold on to the practice (despite its derogatory overtones, few shrink from the term). Arguably the most famous gypsy brewer, Mikkeller, from Denmark, with no fixed address, has made beer in breweries all over Europe, including Nøgne Ø in Norway, BrewDog in Scotland and de Proef in Belgium.

8. What’s a “session beer”?
Beers that are flavourful but easy drinking and typically less than 5 per cent abv – lighter-style brews usually without harsh, hulky, dry-bitter hop profiles that can be drunk continuously over an evening without exhausting the palate.

9. What are “Brettanomyces”?
A term in ever increasing circulation due to the rising popularity of sour or “wild” beers, also know as “brett”, Brettanomyces is a yeast that produces volatile, funky, off-flavours in beer often affectionately described as “barnyard” or “horse blanket”. In some styles, such as herbal pale ales or Belgian-inspired saisons or sour ales, these acidic, tart notes are desirable and beers that show pronounced fruity, complex, wine-like nuances are often described as “wild” or “brett beers”. Other brewers will go to great lengths to stop brett and other types of bacteria, such as lactobacillus and pediococcus – collectively known as “bugs” in brewing circles – from contaminating so-called “clean” or conventional styles of beer.

10. What is “head retention”?
Head retention refers to the length of time the foam on top of the beer lasts once poured in the glass. A beer with good head retention will keep its head until finished; poor head retention means the foam dissipates quickly and the beer appears watery or dilute. The benefits of head retention are debated: some believe the head carries aromatics not found in the beer itself; others say head stability is purely a matter of aesthetics. Either way, some beers have greater natural head retention than others. One of the primary sources of foam is isohumolones – a form of alpha acid found in bittering hops. Highly hopped beers, therefore, tend to show higher head retention.

11. What’s an “Imperial”?
Imperial IPA, Imperial Stout, Imperial Brown Ale – somewhat arbitrarily, the word ‘’Imperial” has been tacked on to a number of new beer styles in the past few years and is often a point of confusion for the lay drinker. The term derives from Russian Imperial Stout – a traditional high-strength, custom-made style of beer exported from England to the Czars of Russia in the 1700s. More recently, the term has been magpied by a number of brewers and tends to signal a high-alcohol beer – usually a hoppier, more extreme, intense, high-gravity refit of a traditional style.

12. What are “adjuncts”?
You will often here craft beer devotees rail against super-brand brewers of fizzy, yellow lager using artificial, cost-cutting filler adjuncts in their beer. Adjuncts, in brewing, refer to any fermentable unmalted grains – corn, rice, rye, oats, barley and wheat – used to supplement malted barley, the main ingredient in the mash. Big brewers will typically use either corn or rice as cheaper substitutes for barley malt in order to cut productions costs and lighten flavour. The use of adjuncts in craft beer has always been a grey area. Until last year, the Brewers Association (BA), the trade group representing small brewers in the US, defined a craft brewer as being “traditional” with “either an all malt flagship” or with “at least 50 per cent of its volume in either all malt beers which use adjuncts to enhance rather than lighten flavour.” In other words, adding spices like clove and coriander, as some Belgian brewers do to their wheat beers, was fine; corn or rice was not. Still, the wording effectively disqualified some small, family-owned brewers such as August Schell who’d been making beers with a small amount of corn in their recipes since the 1800s. So the BA amended its definition. Now, a brewer needs to have “a majority of its total beverage alcohol volume in beers whose flavour derives from traditional or innovative brewing ingredients.” In other words, no specific ingredient, or adjunct, is forbidden.

14 things every bartender needs to know about pisco