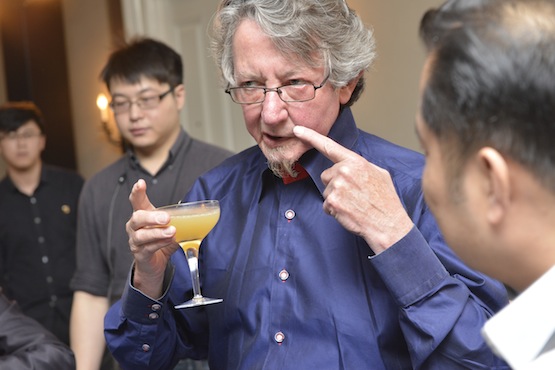 What does it mean to be a mindful bartender? In China to judge World Class, godfather of the bar Gary Regan explains.

DRiNK: I’ve had a conversation recently with a bartender about how a few bartenders seem to be more obsessed by the length of their barspoons, rather than making a good drink. Do you recognise that problem?

GR: A few year’s ago in the US I wrote a story about something similar. I call it the emperor’s new clothes. All these bartenders, with only a couple years’ of experience, are putting together cocktails that are really fancy, using ingredients that aren’t usually used, and methodology that they have made up themselves, and some of them are really good, but the vast majority are bullshit. And then customers go to these bars and the bartenders present these new drinks and the customers are afraid to say, “Yeah, but it tastes like shit.” And when I wrote that article I didn’t know what the reaction was going to be from bartenders in America. There was a chance they would rail back at me and say, “Yeah, but you are just an old fart who doesn’t understand.” But the vast majority of the feedback was, “Thank God someone said that – it needed to be said.”

DRiNK: Part of the problem is bartenders coming into the industry, wanting to get better fast, and picking up only on what they see around them. You can’t blame these new bartenders for being influenced by the latest trends.

GR: Right, but I do blame them for trying to progress too quickly. It’s necessary to serve your apprenticeship and to keep learning and keep learning until at least you have a good grasp of the basics, how cocktails work and how ingredients work. A lot of these young bartenders in the States have by-passed that step.

DRiNK: So that happens everywhere? Even in the birthplace of the cocktail?

DRiNK: But China is at a different part of the cycle than in New York or London. What is the right expectation level for bartenders here?

GR: I keep thinking about France. France was late coming to the new cocktail scene. But there was a guy called Charles Vexenet who decided to go to London from France to learn to be a bartender. He had no English but he got a job as a dishwasher. Eventually he became a bar-back, then a bartender and now in my opinion Charles is one of the best bartenders in the world. When he first went, the other French bartenders he told he was going said, “Yes, teach them how to make cocktails.” And he said, “No, you are wrong, I am going there to learn”. Now look, ECC and now other bars have helped get France right up there, and that can happen in China, if it’s managed properly. It’s also a case of developing a Chinese style of bartending. And that will come.

DRiNK: For three years you’ve been encouraging Chinese bartenders to send you their recipes. Has anyone sent you something back?

GR: From China? Not that I recall.

DRiNK: So what’s your message? To give them a kick up the backside?

GR: What have [they] got to lose? Show the world what China has to offer. There’s no reason for shyness. I would find that very amusing. I’m just an old fucking bastard after all… what’s their problem, man?

DRiNK: And it’s not a problem of creativity. People are happily coming up with original drinks now.

GR: Yes, and I would love to get a recipe from a bartender being creative with baijiu. It’s a hard ingredient to use. But I remember I thought that about scotch, and then I learned in the 1990s was that scotch goes really well with anise. Once you know that, working with scotch becomes much easier. So maybe what we need to know is a basic flavour that marries with baijiu well, and that would be a starting guide. I would love to try Galliano with baijiu… I might be wrong, but I’d love to try it.

DRiNK: You have this philosophy that a drink should be made with love. What is more important – skills or personality?

GR. Personality. But personality is the wrong word. My point is that anyone can make a drink. If you want to learn how to make a Manhattan, and you’ve never learned how to make a drink before in your life, it will take you about ten minutes. But for a bartender to care about their guests, that takes mindfulness. When you choose to be a bartender, you choose a life of service. Guests are the same no matter what country; they want to be looked after. So if on a Tuesday night a bartender makes 10 guests happier when they walk out than when they walked in, you have just changed the world. If a million bartenders all over the world make 10 people happier, then you have ten million happier people all over the world.

DRiNK: That’s what a bar is, it’s a refuge, a place to relax. And bartenders are the lubricators for that. They help people along.

GR: Being a bartender gives you an opportunity to make a difference. But don’t take yourself too seriously. Which is why being mindful will make you get on better with your staff, give you a bigger tips jar, and will help you get laid more often.

DRiNK: Lots of very smart, very aware adults working behind the bar in China, but they just need to understand what a bartender can be.

GR: There are hundreds of thousands of mindful bartenders who have never heard of this expression. My dad was a mindful pub landlord, but he had never heard this expression. He just knew that he had to take care of his customers. And more than once the phone of the pub rang in the middle of the night and it would be one of his regulars calling to say that her husband had just died, or their mother, or whoever, and asking my dad, “Bernard, what do I do?” And he would be the one who phoned an ambulance and then he would go over and sit with them and he just knew that this was the right thing to do. And in return those people gave him so much support. No one took advantage.

There is another story, which I’ll try to keep short. There was a guy in Bolton, where my dad’s pub was, by the name of Blosh. He was the toughest motherfucker in town. Five foot eight. Shaved head. (You didn’t have a shaved head in the 1960s unless you had lice or something.) Everywhere he went there were fights and blood was spilled. In the pub my dad had live music, and Blosh would walk in and my dad would spot him and he would make sure he served him. “Blosh, nice to see you, what are you having?” “Pint of bitter.” And meanwhile everyone in the pub is watching, waiting to see what is going to happen. Blosh would then go over to the compere, a guy by the name of Jacko Diamonds – with a piano player and drummer called Sticks and Tones – and before you knew it Blosh was on stage, singing Danny Boy with the most amazing tenor voice you have heard. The rest of the pub was in tears. And he would then come down off the stage, drink his pint and leave. He was just looking for somewhere to let off his frustration without beating the crap out of someone. And where other pub landlords would say, “I’ve had enough of you, I don’t want any trouble,” my dad showed him respect.