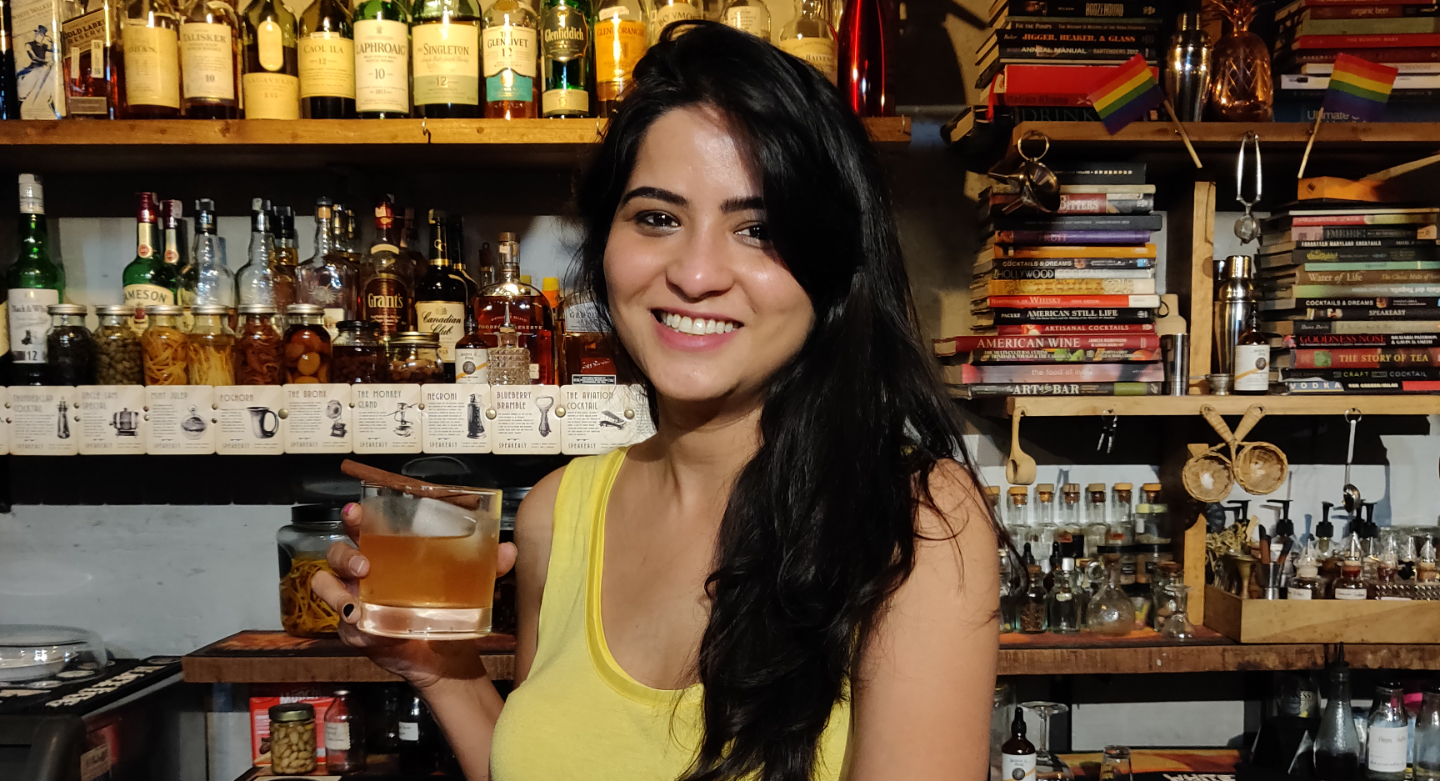 The co-founder of Sidecar talks women in bartending, being one of Asia’s 50 Best Bars and surviving COVID-19. By Holly Graham.

Minakshi Singh, co-founder of India’s Cocktails and Dreams Speakeasy, and Sidecar – number 40 on Asia’s 50 Best Bars – has lived and breathed hospitality for most of her working life. Immediately after graduating with a degree in hotel management, she found herself behind the stick, bartending for some extra cash. “The more I learned about beverages and bartending, the more I realised I loved it for more than just the money,” she says. “I was really excited to be learning about cocktails, the art of service and talking to guests.”

However, in India, women working in bars is extremely uncommon, and as Minakshi set about forging her career in the booze industry, she realised it wasn’t going to be easy. “I had a tough time telling my parents I was a bartender. I’d graduated with a management degree – but I wanted to be a bartender, not a manager. To my parents, a bartender is so much lower down the ladder than a manager, so for the life of them, they couldn’t understand why I would want to do it.”

As well as cultural and class issues, a horrific murder in 1999 set things back even further. At a party in New Delhi, Jessica Lal – a model hired to serve drinks – was shot dead by a man who demanded a drink when the bar was both out of liquor and closed. “This particular incident really shook everyone, as bartending was already viewed as a shady job,” explains Minakshi. “Back then, people believed female bartenders are easy because they drink and work with alcohol, and they should do as they’re told. These notions still exist to an extent now, but I think it’s a lot more internalised as opposed to verbalised.”

Minakshi says she thinks the shooting pushed the progress of the industry further back, and that even nowadays, most parents are scared for their children – especially women – who bartend. However, she persevered and says during her formative years, she wasn’t aspiring to open bars or work elsewhere; she was just going with the flow. “After a few years I began to realise the booze industry is a much larger world. I felt like the longer I worked in the industry, the more I wanted to know and just kept getting really excited.”

“When I began in 2003, there were next to no female bartenders, but during the time I was looking to break into the industry, I met my current business partner Yangdup Lama.” Yangdup pointed Minakshi in the direction of a small start-up that was doing beverage consulting and training, and she joined them as a trainee, still bartending in the evenings to make ends meet.

Minakshi got what she calls her big break when she was offered a job with Diageo India’s marketing team, and from there she moved to Pernod Ricard where she really honed her understanding of the industry. She and Yangdup had begun to think about opening a bar, and in 2012 the pair finally decided it was time to break out. Minakshi quit her job and opened Cocktails and Dreams Speakeasy in Gurugram.

Minkashi reveals it was a real challenge to get people in India to drink an Old Fashioned or Whisky Sour – “No one could give two hoots about cocktails and even having egg white in a cocktail was a struggle.” But not long after the bar opened, India was at a turning point where people began to travel more and visit other bars, returning to order cocktails they’d previously shunned. “I was so proud – and shocked – when someone ordered a Negroni on their own,” says Minaksi. “It’s a bitter cocktail and that was a hard sell for the Indian audience at the time.”

Five years later, the pair went on to open Sidecar in New Delhi – what Minakshi calls their dream bar. “This is what we would’ve opened before if we had the money. When we opened Speakeasy, we got a lot of offers from people to invest and wanting to make it a chain, but we made it very clear that the bar works because of its guests and the fact that it is genuinely hidden away,” she explains. “You want to realise your dream rather than sell out – and that’s what Sidecar is for us. We went all out and wanted to showcase our techniques; to talk about sustainability and fermentation, and make our own bitters, syrups and tinctures.”

Fast forward to May 2020, and Sidecar became the only Indian bar to make it onto Asia’s 50 Best Bars, and only the second bar from the country to make the cut since the list’s inception in 2016. “The fact that we got on the list was massive. We didn’t open the bar with the intention of getting on any lists. I don’t think that’s what it’s about. It’s about your guests, service, drinks and experience, and we have always firmly believed in those as the basics. You can never cheat on the basics. You cannot skip those steps and think you’re going to win awards because you have the biggest advertising budget or whatever.”

Minkashi says that being on the list makes her feel as if they are finally getting recognition on a wider stage. “So many people are jaded about it, but it’s a very big deal for us. We have always believed in doing what we do in an honest way, and doing it with our whole hearts. We opened Sidecar in 2018 and Yangdup has been bartending for 25 years, so it’s not like we just came into the industry and got awards. A lot of time, effort and energy has gone into creating Sidecar.”

While Minakshi says she remains humble and insists she doesn’t feel in a position to be dishing out advice, she has one sage pointer worth noting: “Remember you are in hospitality. The word hospitality cannot be forgotten. Remember to make your guests feel amazing when they come to you. Talk to them. Find out how their day was. Drinks can be fixed if they’re not right, but service can’t be reissued if you fuck it up. People go out to feel better about life, to meet friends and feel like maybe everything in the world is going to be okay.”

Minakshi reckons that hospitality is pretty innate to Indians, saying: “Atithi devo bhava is a Sanskrit verse, which literally means “the guest is equivalent to God”, and is part of the codes of conduct for Hindu society. “We’ve grown up with that and I think as long as Indian bars remember the basics and keep updated, we will build our industry and in turn, lift each other up.”

Minakshi believes India’s bar industry is moving in the right direction, albeit taking baby steps. “In the last five years, I would say there’s been a tremendous growth, especially when it comes to women in the industry. Groups are forming and people talk to each other and share ideas. As a 50 per cent partner with Yangdup, it was crazy that others outside our business never asked my opinion for the longest time, just because I’m a woman.” Minakshi says that she realised that was partially because she was happy being in the background, preferring to manage the show rather than be in the limelight. “I realised that now it’s time to show people who we are and not just promote our men all the time. I’ve learned that it’s important to use my voice for other women as well.”

That said, Minakshi notes that India’s bar scene is so nascent that sometimes it’s not solely about equality behind bars, but still recognising bartending as an honorable job. “People are only now realising bartending is a viable option as a career. You get to travel and people talk to you and realise you are actually intelligent. When I was bartending, I only ever met one other female bartender. There’s only a few now who get recognition – but it’s not like Indian male bartenders are getting much recognition either.”

COVID-19 has obviously been tough on the bar industry the world over, but it has been particularly tough on India, with huge numbers of cases and harsh lockdowns. Minakshi and her team shut Sidecar on St. Patrick’s Day, saying: “We sat there drinking Jameson thinking that we’d just be closed for a couple of weeks. Nobody thought this is going to go on for this long. Playing everything by ear has been the most taxing thing, as there’s just no certainty. As a business owner, we have rent, salaries, tax and such to pay, but there’s been absolutely no relief.”

Implementing what Minakshi calls a coping mechanism, she’s ensured that she and her teams interact on a daily basis. “We used to have these two-hour calls with all our teams – 55 people – to begin with. First it was just chats, then we started trainings on spirits, food, service, sustainability, etc. Then we started inviting outsiders to speak, which led onto Instagram Live sessions with people from all around the world. If it wasn’t for the pandemic, we wouldn’t have connected and had so much time to connect with so many people – that’s been nice, but there are highs and the lows of course.”

The bar also launched non-alcoholic bottled cocktails, as in India they cannot legally sell alcohol by delivery. “We sell pre-mixers, so you add the base spirit to create the cocktail at home. It’s not a viable business model, but it keeps us in people’s memories. It’s your choice what you want to do in lockdown and it’s good to pause, but I have always wanted to give focus and visibility to the Indian bar scene and I’ve really been able to do that now.”

Minakshi and her team have had lots of messages of support and say that getting that love feels amazing to them. “We are hanging on by a thread. I don’t know what’s going to happen in the next month, so that support means a lot. We have come up with bartender training programmes, corporate workshops, solutions for liquor companies… we are peddling everything and anything under the sun. We have to do it for ourselves too, to keep stimulated.”

Minakshi hopes that her venues – and of course others – can pull through to the other side of the pandemic, as India’s bar scene is only just beginning its ascent. “We wanted to show the world who we are. We worked hard to be here and I’m just so glad that somebody noticed. I hope that going forward, it continues to grow. I’m an eternal optimist.”

Get to know: Old Fashioned