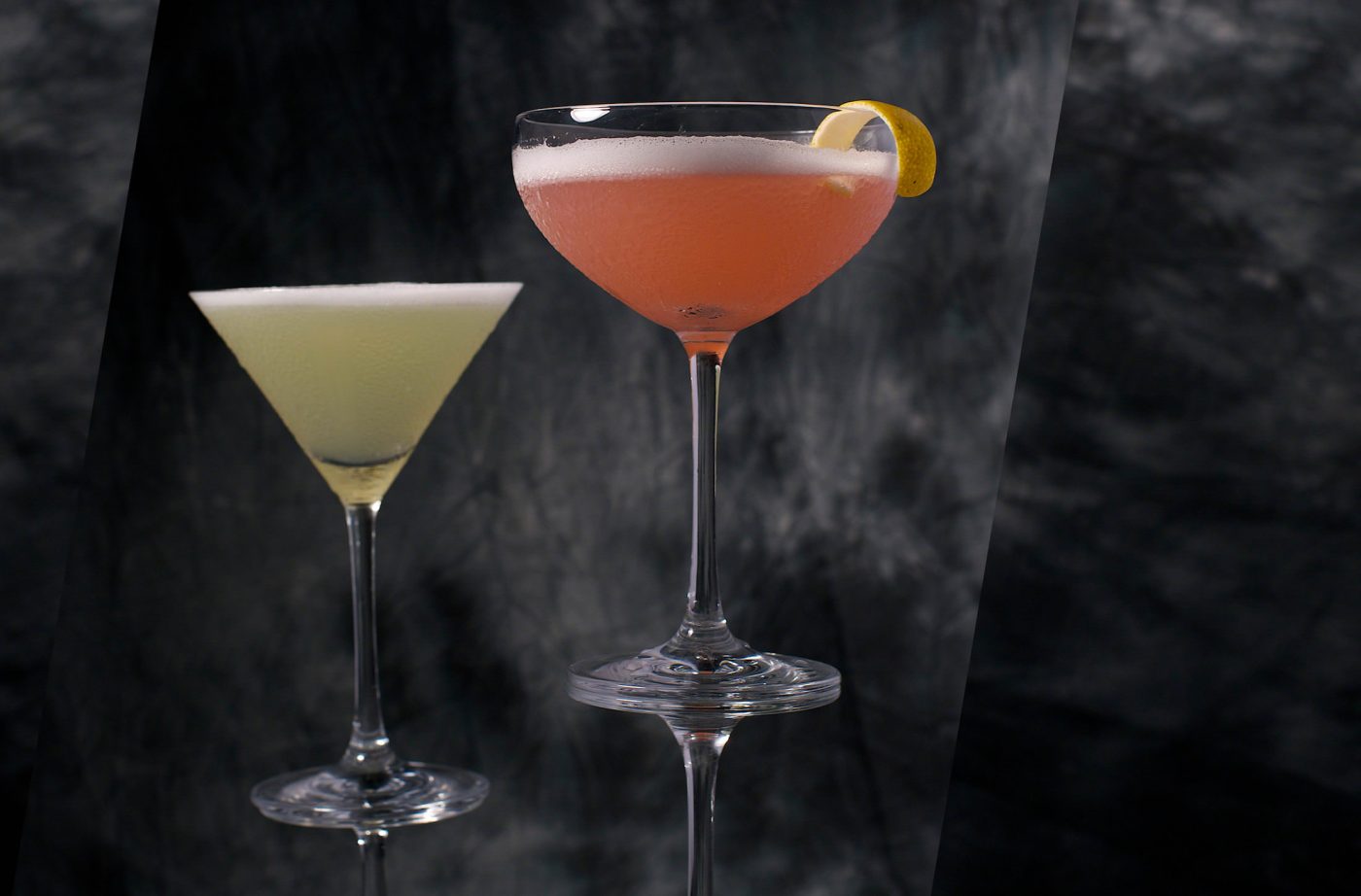 A once-coveted starlet of the pre-Prohibition era, few cocktails have achieved such ridicule as the Pink Lady. But why? Seamus Harris remembers a century of pink-drink prejudice.

It takes confidence for a man to walk into a bar and order a Pink Lady. Even a request for a White Lady inspires strange looks. Last time I tried, the barman snickered and produced a tasty White Lady with an inexplicable blush of grenadine. Humiliated, I quaffed the thing and retreated to the manly safety of a beer.

In the spirit of consciousness raising, it seems useful to take a moment to train the lens of feminist theory on the world of mixed drinks. This application of radical egalitarianism to deconstruct traditional gender roles suggests that our patriarchal society has cast the pink drink as the inferior “other” – thus marginalising a diverse range of perfectly valid mixological constructs. Ironically, the unequal power structures established within the patriarchal framework perpetuate male self-oppression, because, setting feminist theory aside for a second, a properly put together Pink Lady is quite delectable.

Pink drinks were not always considered girly. The patriarch captains-of-industry who ran the 19th century thought nothing of inhaling a pink cocktail before dinner. Whipping gin, lemon juice, raspberry syrup and egg white into some alluring pink foam, The Clover Club was the house pour of a venerable American gentlemen’s institution in 1910s Philadelphia. Struggling to comprehend this juxtaposition of oak-panelled gravitas and fluffy pink quaffables, we might hypothesise that going pink was easier within the cosy confines of a male-only institution. In fact, the reason is simple: pink, it turns out, has only relatively recently become a girl’s colour.

In 1934 Esquire deemed The Pink Lady among the ten worst drinks of Prohibition. Cocktail colourism had arrived.

The hand in this change belongs to our consumerist society and its efficiency in fleecing new parents of their cash. The colour pink had trotted along happily for centuries being gender neutral. If anything, as a shade of the rather dominating red, it was considered rather masculine. Pink’s fortunes changed in the early 20th century as department stores persuaded the burgeoning middle class to colour-coordinate babies by sex. The old approach of androgynous white cotton hand-me-downs perfect for a taxing regime of messy abuse and copious bleach, would no longer do. Since the objective was increased sales of infant couture rather than true aesthetic nirvana, decades of colour confusion ensued as competing stores scrapped over whether it was Edgar or Ethel who got to be dressed in pink. Consensus that pink was for girls only arrived in the 1950s. Predictably, pink’s creeping feminisation led to pink drinks attracting derision. In 1934 Esquire mocked the Pink Lady by listing it among the ten worst drinks of Prohibition. The Clover Club was also targeted, yet the White Lady was not. Cocktail colourism had arrived.

But with numerous recipes for Pink and White Ladies floating around, perhaps Esquire was confused rather than misogynist. Fancy a gin, grenadine and cream? I thought not. While not all Pink Ladies are worth getting to know, the original is a neglected gem. Named after an American musical, the cocktail appeared in the final halcyon years before the First World War. Sort of a Clover Club enticed on a summer picnic with a dash of apple brandy, the Pink Lady evokes fresh meadows and ripe fruit, yet remains dry and adult. The fruit brandy is the secret. How such perfection ever came to be ruined is a mystery. Perhaps the Pink Lady was simply too pure for this world? Her white sister on the other hand started out very bad but reformed. An avant-garde abomination of Cointreau, crème de menthe and lemon juice somehow became the perfectly dreamy combination of gin, Cointreau and lemon juice.

When colour prejudice and quaintly feminine monikers allow a pair of fine drinks to sit neglected, it seems time to dismantle the patriarchy sip by sip. Remember, the personal is political, so make a statement and order a Pink Lady.

19th Century Britain rules an empire on which the sun never sets, and cartographers map every inch in pink. The rowing teams of Eton and  Westminster compete for the right to claim pink as their school colour, and Pink Gin lubricates Britain’s colonial administration. The Americans, always inclined to be fancy, enjoy Jerry Thomas’s Knickerbocker Punch, and then move on to the Clover Club. The former of these is both pink, and lavishly garnished with seasonal fruits and berries. The world is truly in the pink, and it is a wonderful time to be a pink drink.

1910s This eventful decade sees the First World War destroy the old order, yet leaves a scarred population richer for being able to drown its sorrows in Pink Ladies. The hit Ivan Caryll musical The Pink Lady premieres on Broadway in 1911. Claudine, the pink lady of the title, is more of a red lady in today’s colour language. That is to say, she is a demimonde sex siren rather than a virtuous girl of fine breeding. Sadly for Claudine, she lives in an era when the good girl always gets her man. The Pink Lady cocktail is invented to advertise The Pink Lady (musical version), and appears in 1914 recipe collection Drinks by Jaques Straub. The White Lady cocktail makes ghoulish reference to a female ghost, and materialises post-war in 1919. Harry MacElhone first conjures it up at London dance club Ciros. Initially it assumes the form of a saccharine nightmare, and haunts watering holes in chilling reminder of the numerous ways in which war has shattered the social fabric. Another decade passes before the White Lady matures into the sort of cocktail you might introduce to your parents. Harry’s New York Bar in Paris is where the fine-tuning happens.

1920s-1950s Pink turns feminine during the inter-war years, with the Second World War finally clinching the deal. Department stores peddling infants’ clothes drive the trend to colour-coordinate by sex, but initially disagree over how the new colour scheme should work. In 1927 Time magazine helpfully lists the guidelines of different American department stores on sex-appropriate colours for infants, and reveals as many stores favouring pink for boys and blue for girls as vice versa. By the start of the Second World War, however, department stores agree that blue is for boys and pink is for girls.

1970s-present day The world is more complex than ever, and pink becomes politically charged. Some radical feminists vilify pink as a symbol of patriarchal oppression, others celebrate it as a symbol of femininity, and yet others associate it with gay pride. Pink incites passions as never before. Just this year Berlin’s newly opened Barbie Dreamhouse witnessed a topless woman stand inside a giant hot-pink stiletto brandishing a flaming crucifix because, err… pink, or something. Pink drinks doggedly battle on across this peculiar cultural terrain, but struggle to be taken seriously even when they win legions of fans. Case in point is the pet obsession of many craft cocktail bartenders with weaning women off the Cosmopolitan. Of course these guerrilla fighters will never suggest a Pink Lady as a worthy sub for a Cosmo – another pink drink could not possibly be “serious” enough. Ted Haigh’s “Year Zero” proposal to rename the Pink Lady the “Secret Cocktail” shows just how absurd anti-pink prejudice has become. I tentatively suggest taking inspiration from Japan. Back in the 1970s, as American women burned pink bras, Japanese music fans mobbed legendary girl group Pink Lady, cleared shelves of the first Hello Kitty merchandise, and probably washed all this kawaii down with Pink Lady cocktails. This seems to me to be the spirit. Time to embrace the pink.