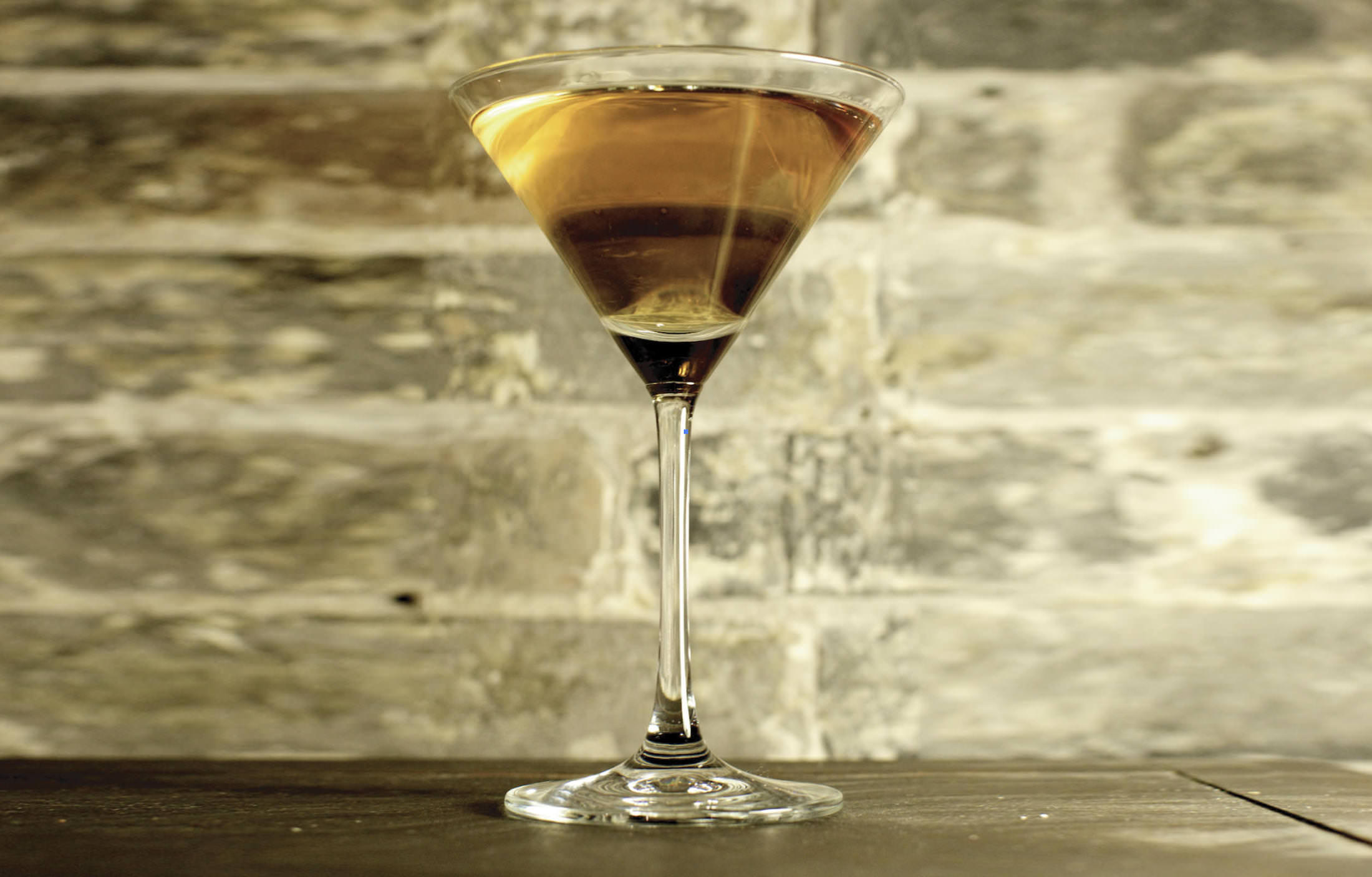 What is the sound of one glass clinking? By Seamus Harris.

The Bamboo Cocktail is a fluid Zen kōan – austere yet intricate, ethereal yet intoxicating, fleeting yet undying. Blending sherry and vermouth, this entrancing libation teaches us that the road to happiness need not be paved with distillate. The enlightened can tread a middle way, their steps neither sober nor drunk. Like bamboo itself, which bends under winter snow only to stand upright in the spring, the Bamboo Cocktail adapts. The thirsty acolyte can try it with a bone dry manzanilla for the crispest of aperitifs, while the Zen master might prefer meditation for many lifetimes upon a layered amontillado. The true guru will intuitively match the formula to the drinker and situation. Little known outside its native Japan, the Bamboo Cocktail deserves contemplation.

When Commodore Perry sailed his warships into Tokyo Bay in 1854 and politely insisted Japan open for business, cocktails were surely the last thing on startled Japanese minds. Since expelling the Portuguese and Spanish a couple of centuries previously, Japan’s sole point of contact with the west had been the trading entrepôt of Dejima. A football-pitch-sized island in Nagasaki harbour, strictly quarantined, and inhabited exclusively by Dutchmen, Dejima had not been an effective conduit for mixological exchange. As tends to happen, the arrival of the US Navy shook things up, and a cocktail or two got sunk in the process.

Realising its vulnerability, Japan launched a breakneck modernisation via the Meiji Restoration. The port of Yokohama grew from a quiet fishing village into a bustling gateway for western ideas, and saw Japan’s first railway, electrical grid, brewery and probably cocktail bar. This was, after all, the cocktail’s golden age. As one American traveller noted “In China and Japan the American sphere of influence is defined by the cocktail, and it has an open gate. At Nagasaki and Yokohama, in the latter country, as good a cocktail can be had at a few places as in San Francisco.” Had that same traveller returned to Yokohama today, he would have appreciated Japanese refinements such as the hard shake and hand-carved balls of ice at minus 18 degrees celsius. However, while the gates were now wide open, Meiji Era Japan remained an importer, not an exporter, of cocktail culture.

As tends to happen, the arrival of the US Navy shook things up, and a cocktail or two got sunk in the process

Louis Eppinger put Japan on the mixological map for the first time with his Bamboo Cocktail. A German-born contemporary of Jerry Thomas and William “Cocktail Bill” Boothby, Eppinger tended bar across America before washing ashore in Yokohama in 1889. He found employment at The Grand Hotel, where he won over guests by maintaining excellent standards, and introduced the Bamboo Cocktail as a house specialty. Easy-drinking yet flavoursome, Eppinger’s creation softens the chiselled astringency of sherry with vermouth’s lightly sweet aromatics. Like the Sherry Cobbler, this drink is more refreshing than straight sherry, but unlike the Cobbler it has an added depth. The crisp briny flavours are a perfect foil to Japanese food, which Eppinger also introduced to his hotel’s menus. Tempura, a Japanese twist on an Iberian dish, seems an especially fitting pairing for a cocktail based on Spanish wine but born in Japan. That thought probably takes us full circle – or in Zen terms, we have before us an elegant ensō. Not only had the Americans arrived, but the Spanish had returned, and the Japanese had cast anchor on their own voyage of cocktail discovery.

The proportions are controversial. The earliest surviving recipe suggests equal parts, but Japanese bartenders now favour the sherry to create a very dry cocktail. I prefer the Japanese way because I like sherry – any excuse for more. It also makes sense to use the Japanese method for a Japanese drink. Most important though, the dry formula tastes delicious. Go easy on the bitters.

Sherry is amazingly diverse, but any variety will work provided it is not too sweet. For an excellent light aperitif use a delicate fino, or better still the even more ephemeral manzanilla. Shifting gear to amontillado gives a richer and more substantial drink. Here an equal parts mix may become necessary to keep the sherry in check. A tasty refinement is two parts fino, one part amontillado, and one part vermouth – still dry, but with ambrosial notes of toasted nuts. Oloroso is too sweet to work alone, but a dash mixed with something dryer can open a path to nirvana. Sherries vary tremendously even within the main styles, so experiment with what is available. Incidentally, sherry is very delicate despite its intense flavours. Refrigerate once opened and finish the bottle as soon as possible.

A few Japanese bartenders insist this drink should be “rolled”, meaning prepared by pouring back and forth between two mixing glasses to simultaneously mix and aerate. This is reminiscent of the traditional venenciador style of serving sherry, where the wine is aerated by pouring from a height. Definitely not essential but sounds fun.

The Path to Enlightenment

Mid-19th Century Sherry is probably how western merchants toasted the news that Japan was open for trade after Commodore Perry’s successful mission in 1854. The idiosyncratic Spanish wine is hugely popular among Victorian drinkers, and Edgar Allen Poe’s The Cask of Amontillado (1846) recounts how a weakness for sherry leads a man to immurement. Spain’s hottest export naturally joins the bartending arsenal, most notably in the Sherry Cobbler – sherry, sugar and ice, shaken with fresh fruit, and served with a straw. Harry Johnson’s Bartenders Manual enthused in 1888 that the Sherry Cobbler was “without doubt the most popular beverage in the country”. The twin novelties of ice and a straw helped the drink to spread, and besides America it was also being enjoyed in Europe, Australia, and probably Japan.

1884 The Adonis Cocktail appears. The 1880s saw a vermouth craze in which sweet vermouth was poured into everything; with sherry one of the most popular bottles behind the bar, it too got the treatment. Named after a Broadway musical, this mixture of sherry and sweet vermouth is an ancestor to the Bamboo.

1890s American naval officers purchase the Grand Hotel in Yokohama and hire Louis Eppinger as manager. Eppinger gets busy raising standards, and early visitor Rudyard Kipling comments positively on details like the printed menus – a novelty when handwritten menus were still the norm. After whipping the hotel bar into shape, Eppinger invents the Bamboo Cocktail. The substitution of dry vermouth for sweet transforms the Adonis into an exceptional aperitif. Eppinger also invented the Millionaire, which added a touch of pineapple juice to the popular Martinez.

1990s The Bamboo Cocktail enjoys a brief burst of popularity in America, becoming Japan’s first cocktail export as it skips the Pacific. Californian bars advertise the drink, and it is even sold in bottled form. William Boothby’s The World’s Drinks and How to Mix Them (1908) records the Bamboo as equal parts sherry and dry vermouth, with two dashes of orange bitters, a twist of lemon and an olive.

1920s The Bamboo Cocktail falls into obscurity in America. Jazz culture saw sherry as old fashioned, and bootleggers naturally focused on the high-proof stuff. In Japan, the Kanto Earthquake of 1923 destroyed the Grand Hotel, although it was rebuilt in 1927 and still stands on Yokohama’s bund. The newly built hotel hosted Charlie Chaplin, Babe Ruth and General Douglas MacArthur. During his 1932 visit Chaplin narrowly escaped assassination by Japanese nationalists opposed to westernization – presumably they didn’t like cocktails either.

Post WWII Strong American influence in Japan following the war cements the cocktail’s place in the mainstream of Japanese culture. Typically, the Japanese do not simply preserve tradition but also give it a perfectionist polish. By the 1980s the Japanese cocktail is healthier than its American ancestor, which is fighting a losing battle against sour mix and lazy attitudes. The Bamboo, as a rare historic and indigenous cocktail, remains a mainstay of Japanese bars. While not exactly fashionable, it enjoys excellent health in Japan despite vanishing from America.

21st Century While the Japanese stick closely to the traditional formula for the Bamboo Cocktail, others experiment and generally sweeten the drink. Poet-bartender Hayden Lambert’s Pomp and Glory is a Bamboo-inspired sour using sherry, elderflower liqueur and lemon juice. The result is perhaps a sort of rare “bamboo in flower” effect. The Bamboo Monk anoints amontillado with Benedictine – robust but approachable. A final variant, ominously dubbed the Punji Stick, uses a base of fino but replaces the orange bitters with a touch of curacao. I enjoy this last variant. Like the original it retains the character of the sherry, teasing out its dry citrus and mineral notes while lightly daubing them in buttery sweetness.

7 things Candelaria wants you to know about tequila and mezcal