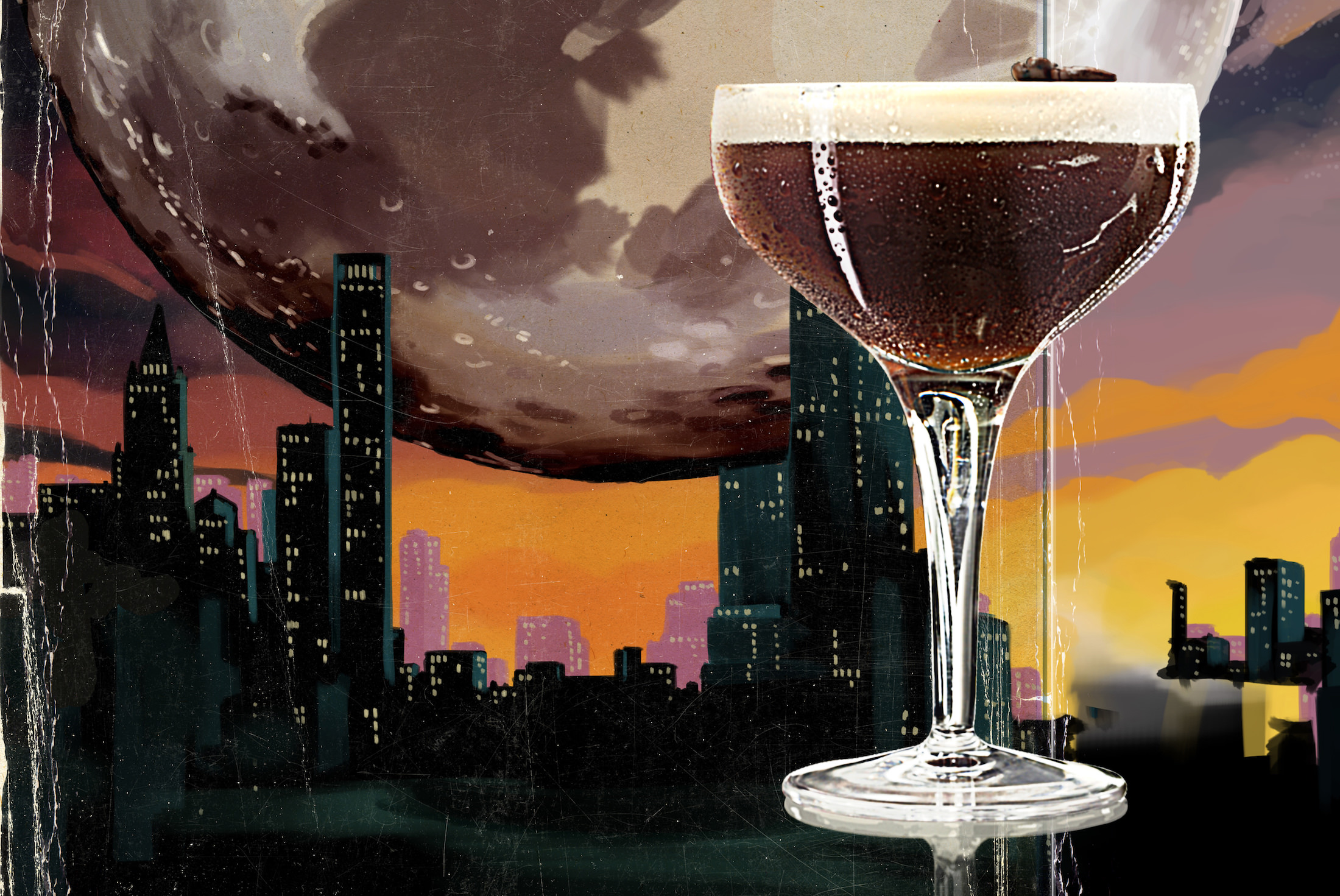 Some say the 1980s were the lowbrow nadir of cocktail culture. Not so, says Seamus Harris, who reps one of the decade’s most enduring classics. By Seamus Harris.

We tend to remember the 1980s as about consumption more than creation, and often conspicuous rather than tasteful. But things were stirring in the world of cocktails as a select group of bartenders conjured up influential new drinks. The Espresso Martini has proved one of the most enduring. In fact, we could say it provided just the caffeinated wake-up call to get bartenders taking cocktails seriously after decades of neglect.

Invented by London bartender Dick Bradsell around 1984, the Espresso Martini was one of a slew of Bradsell creations that adroitly applied fresh angles to established formulas. Examples include the Bramble, which enlivened a Gin Sour with berries, and the Treacle, which topped off the Rum Old Fashioned with apple juice. In the case of the Espresso Martini, freshly made espresso takes the Black Russian to a whole new level.

While there were precedents for fresh coffee in mixed drinks, the Espresso Martini was the first such drink to become mainstream. The secret to its success is simple. Espresso in a cocktail makes for something wonderfully intense. The Italians have long practiced something similar with their Caffè Corretto. Unlike the liqueur coffees restaurants serve after dinner, Caffè Corretto is simply espresso with a dash of whatever liquor the drinker prefers. The mix leans heavily towards the alcohol, while the coffee is naked rather than being doused in whipped cream. Pure flavours, in other words.

Much as we like to lament vodka’s lack of flavour, the Espresso Martini is one of those cocktails where it pull its weight

The Espresso Martini is said to have been inspired when a famous American model, still recovering from the night before, walked up to Bradsell’s bar and asked for “something that will wake me up, then fuck me up”. Whatever the truth of the story, I would not recommend the drink as a pick-me-up. The smallish dose of caffeine has no show of counteracting the soporific effects of the booze. To me, the Espresso Martini is more an after dinner drink, best enjoyed when the day’s business is done and only hedonism awaits. Incidentally, it pairs excellently with desert – perhaps a chocolate soufflé with orange sorbet.

This is another drink that works precisely because of the vodka. A neutral base spirit gives centre stage to the rich yet subtle flavours of coffee. When writing about coffee cocktails I cannot resist noting that tequila is a natural and overlooked partner to the mighty bean. But while you can substitute tequila for the vodka in this drink with delicious results, the beast this unleashes is rather less amicable and the focus on the coffee gets lost. Much as we like to lament vodka’s lack of flavour, the Espresso Martini is one of those cocktails where it pulls its weight.

Seven dates you need to remember

1884 A strangely significant decade sees unrelated innovations in Italy and the United States, which will later collide in London to create the Espresso Martini. In Turin, 1884 is marked by Angelo Moriondo’s registration of the first patent for a steam-driven device to produce coffee. After some further refinement, early-20th Century Italy adopts the single-serve, made-to-order “espresso” coffee as a badge of urban sophistication.

1887 On the other side of the Atlantic, a mystery bartender concocts the Coffee Cocktail, recorded in Jerry Thomas’s 1887 Bar-Tenders Guide. Comprising brandy, port and egg, with no coffee, the name suggests a wake-me-up-and-fuck-me-up from a more genteel age. The Espresso Martini bean has been planted, and germination will only take another century.

1936 Something special is quietly brewing down in Veracruz, Mexico. The Alvarez brothers, growers of fine Arabica coffee, approach local entrepreneur Senor Blanco to suggest he uses their coffee in a liqueur he is developing.  He agrees and Kahlua is launched. Flavoured with cold-brewed Arabica coffee and sugar cane (in the form of syrup and light rum), plus a touch of vanilla and caramel, the formula proves a hit. Exports to the US started in the 1960s, and Kahlua is now the world’s best-selling coffee liqueur. The ingredients continue to be sourced from Veracruz though production now happens in Mexico City. The name, said to derive from the Nahautl (Aztec) language, means “House of the Acolhua People”.

1939 While spiking coffee with booze is not new, only in the mid-20th Century does the cocktail community begin experimenting with coffee in earnest. There are obscure innovations, such as the Black & White Cocktail (aka Kirsch Au Café), an icy froth of black coffee, kirsch, brandy and egg-white recorded in Charles H. Baker’s 1939 Gentleman’s Companion.

1949 Tiki bars whip together exotic hot coffee grogs – though these are after-dinner coffees as much as they are cocktails. The classic coffee cocktail of this era is the Black Russian, that simple affair of vodka and coffee liqueur invented by Brussels bartender Gustave Tops for an American diplomat in 1949. The direct forebear of the Espresso Martini, it could be argued that the Black Russian has room for improvement. The problem is that booze people often do not know coffee. The solution lies in Italy, where espresso is the ideal building block for coffee drinks. The Caffè Corretto just needs to be put on ice.

1984 As cashed up hedonists discover espresso and rediscover martinis the inevitable is bound to happen. Dick Bradsell invents his Espresso Martini around the middle of the decade while working at Soho Brasserie, or it may have been Fred’s Club. In a decade of excesses the details tend to get blurry. 1984 is said to have been the year, though, which would put it at Soho Brasserie since Fred’s Club was yet to open. Initially christened the Vodka Espresso, the drink is first served on the rocks. But, given the yuppie thirst for anything in a big flashy martini glass, a bar or two later Bradsell makes the populist decision to serve his creation up. The Espresso Martini is born.

2014 The Espresso Martini has enduring star appeal, spotted everywhere from five star hotels to hipster dens. Variations keep popping up, mostly based on flavoured vodkas or liqueurs in the creamy, chocolaty, or nutty style. But by pairing coffee with the usual suspects these actually distract from the subtle flavours (citrus, fruit, floral) that distinguish good beans when carefully prepared. A far more interesting direction involves the increasing crossover between barman and barista. Unsurprisingly, coffee- (and cocktail-) obsessed Seattle has been the centre of this activity, with baristas staging pop-up appearances in bars, craft cocktails infiltrating cafes, innovations like iced coffee served by nitro-pour, etc. This year, Seattle saw the opening of Corretto, a café-bar devoted solely to coffee cocktails. This truly is uncharted territory. “After something more citrusy? Perhaps try an Ethiopian Irgachefe Martini. . .”