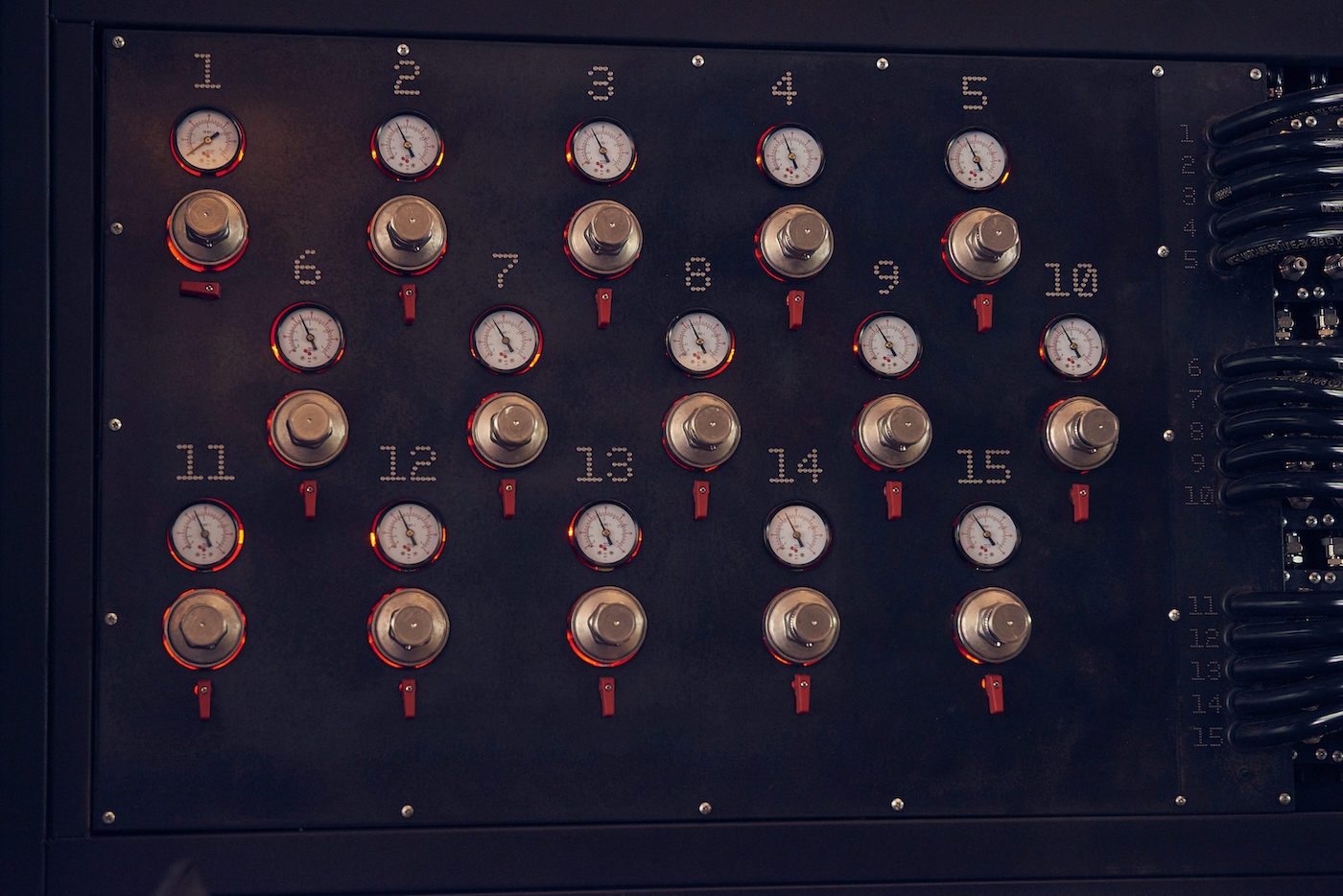 With its first venue in Asia, Stone Brewing’s taproom tops off its cold chain delivery with a self-designed “flux capacitor” tap system for streamlined draught service. No, it doesn’t bring you back to the future – but it does make for just about the frostiest, freshest serve possible. Bar manager Martin Aamodt shares what it’s all about.

Tap-on-tap action
“We work with a direct draw system with 30 lines, but then it is mirrored on the tower for 60 taps in total – bartenders can pour from either side, and that speeds up service. So, we have 28 beers on tap, with filtered water on tap one, and tap 30 being CO2.”

CO2 purging
“We have growlers, but also have a “crowler” machine – any beer that is on tap, customers can have in a can. It’s a smaller format, just under a litre – growlers are two litres – so it’s more portable. The cans don’t break, and they keep carbonation longer. Before filling them, we purge the crowlers and growlers with the CO2 from the tap to get rid of the oxygen – that stops the beer oxidizing and maintains the carbonation.”

Tubes, glycol, more tubes
“Behind the mirror above the bar, on the second floor there’s a walk-in cooler – the beer is unpasteurised so it needs to be kept cold at all times. The lines split from the cooler and the tubes then run down through the wall and into the tower at the bar.

The beer lines surround a glycol line – the idea is that the beer that pours out of the faucet is the same temperature as in the cooler. If you don’t have that, the beer gets warm on the way out. When that happens it causes wastage, foam, higher temperatures – and that sucks for the consumer.”

Speaking of cool…
“The cold chain is something we set up ourselves as our own import company. Our whole logistics is based around the beer being cold for the entire process. The beer leaves cold, arrives cold, the cooler is set to 38 degrees at all times – the industry standard and optimal pouring temperature for all beers – and glycol is a nice touch.”

Passing gas
“On the gas side, we have C02 and nitrogen tanks – those feed to a gas blender, and the gas blender feeds to the flux capacitor. This part of the system is custom made by Gabe Gordon of Beachwood BBQ in southern California. Essentially, it’s a secondary regulator that allows the gas blend to have pre-sets – different blends of nitrogen and CO2 – depending on the style of beer.”

Under pressure
“What having a secondary regulator does for us – aside from look cool – it lets us dial in the gas blend without the bartenders having to mess with it at all. We just choose the blend and apply the pressure, and all they have to do is change the keg. While that happens, I can adjust the blend and the pressure – by the time the keg is changed, it’s ready to pour. We check the pressure and the temperature every day on the gas and the flux capacitor.”

Nice clean lines
“Every 14 days we do a line clean, and while we do that, we take all 60 faucets off to soak and clean. Every quarter we do a more aggressive acid clean. The glycol machines are serviced every quarter to make sure things are running optimally, and that nothing breaks.

You run into a lot of problems if you don’t clean your lines, but it costs money every time you do a clean – our lines are short, because the longer your lines are, the more expensive it is to clean them. I don’t want that to be a factor. It’s essential, it’s like showering every day: you gotta’ do it. But of course, you don’t want to lose a lot of money in the process.

Hot dates
“It’s not solely about the bottom line – it’s about showcasing the beer the way it’s supposed to taste, especially in Shanghai where we don’t have a brewery. Our customers taste the difference. We have “enjoy by” dates on all the beers; we pull and dump a beer once it passes the date. Not that there’s anything wrong with the beer, but it’s not up to our standards.”

More than good looks
“If you don’t have good control, there’s no way you can have good quality. This is by far the most elaborate system that China’s ever seen – ultimately, it’s about making life easy and removing human error. Secondary regulators are nothing new, but the way this is packaged makes everything so simple. And it looks awesome. We can’t deny that.”