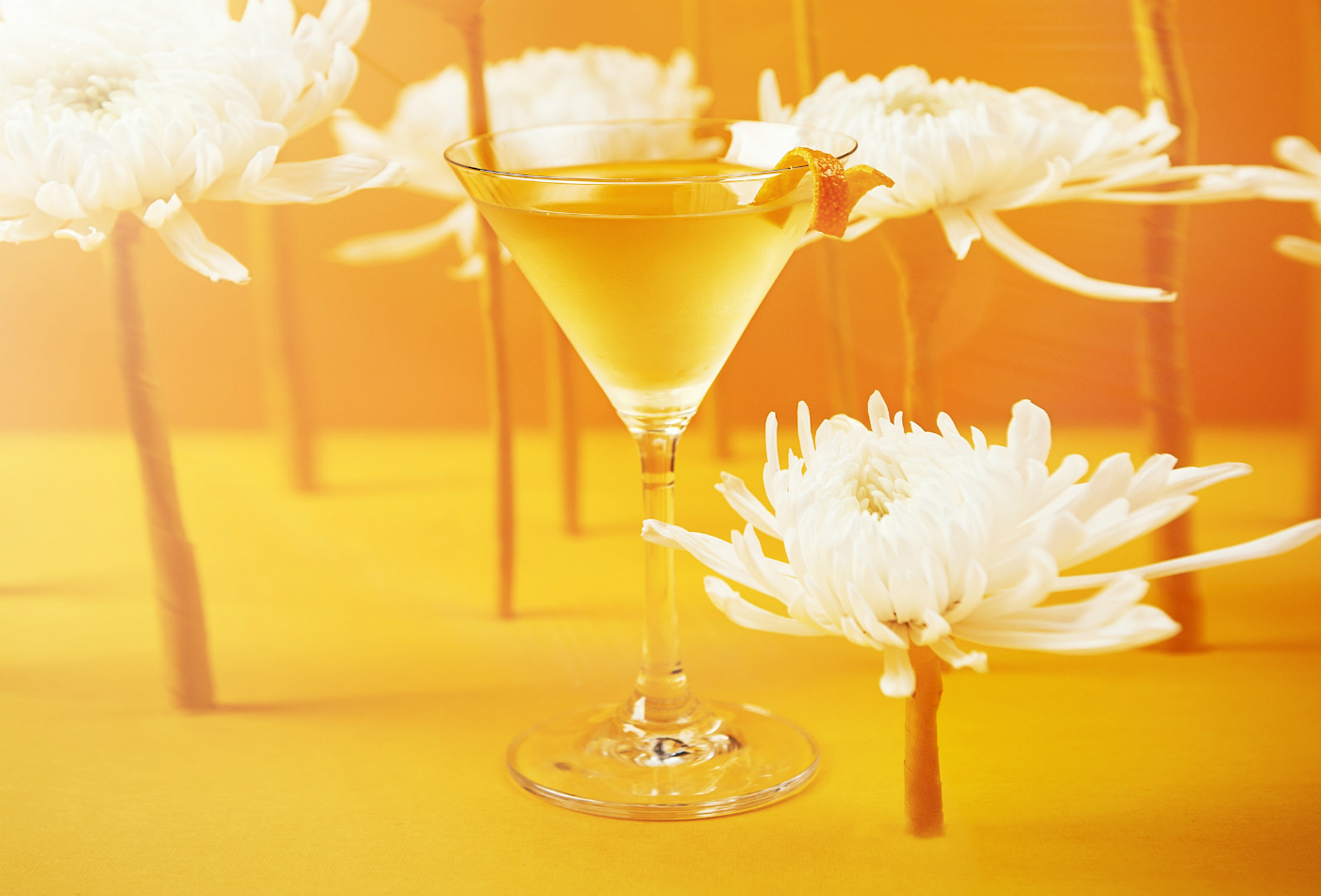 Benedictine brings out all that is holy in Franco-US cocktails. By Seamus Harris.

A centuries old love-hate relationship binds France and the United States. France is America’s oldest friend, an alliance founded on shared anti-monarchical and egalitarian zeal, plus a common distrust for the English. But acrimony seethes below the surface – remember the “freedom fries” inanity that swept America after the September 11 attacks? Nevertheless, here are a pair of headstrong eccentrics whose grudging admiration and sympathy regularly bears fruit. Thus it pays to be present when the Americans take a break from mocking the French, and instead, in their brash yet ingenious manner, raid the staples of the Gallic bar to shake up a new cocktail. Take the Chrysanthemum.

The Chrysanthemum is gentler than most American inventions of the early 20th century that used French bar materials. No boisterous weapon of mass destruction a la the French 75, instead this is a low-octane aperitif in the restrained Gallic mould. Here is a civilised rendezvous, a pre-prandial stroll through a monastic herb garden, more vinous relaxant than spirituous grenade, a sleek American shell encasing a provincial French soul. A masterclass on French artistry in botanical infusion and distillation, it marries vermouth and Benedictine, toasts the herbal union with a dash of absinthe, then perfumes the happy couple with the scent of orange.

The most likely inventor of the Chrysanthemum was Hugo R Ensslin, an under-appreciated pre-Prohibition New York bartender. Ensslin self-published Recipes for Mixed Drinks (1916), an unusual book in that it seems to contain only drinks he actually served. We can surmise this from the large proportion of Ensslin’s recipes that previously appeared nowhere else – Ensslin either invented these drinks or was an early adopter – which differs from the usual contemporary approach of simply cribbing recipes from other books. A case in point is Harry Craddock’s famous Savoy Cocktail Book, which contains dozens of Ensslin’s recipes – David Wondrich puts the number at 146. Besides the Chrysanthemum, Ensslin gives the earliest recipes for the Aviation, that darling of craft cocktail bartenders, as well as the original Alexander and many others. Since his was the last such guide to be published in New York before Prohibition, it provides a snapshot of what was whetting fashionable tongues as the city’s finest bars closed and their customers stumbled home to experiment with bathtub gin.

The Chrysanthemum is worth a try based simply on its credentials as an Ensslin original. But perhaps there is something in the name too? The chrysanthemum flower is one of the “Four Gentlemen” of Chinese brush painting, together with plum, orchid, and bamboo (which incidentally also lends its name to a vermouth cocktail). And that seems to bring us to the best reason for mixing a Chrysanthemum. Vermouth cocktails deserve more recognition. Given vermouth itself is practically a bottled cocktail it is hard to go wrong. The Spanish get it, with their tradition of afternoon vermouth sipping. The real beauty of the Chrysanthemum lies in how it shows that vermouth needs mere gentle coaxing to create drinks that are complex yet light on the booze. Whether you want a sedate intro to the evening, or a quietly stylish way to wind down, the Chrysanthemum offers an answer.

1873Alexandre Le Grand establishes Benedictine S.A. in Fecamp, a picturesque town on the Normandy coast. A local wine merchant, Le Grand had previously announced his “rediscovery” of a famous ancient liqueur recipe. The recipe was said to date to 1510, and to have been invented by Dom Bernardo Vincelli, a Venetian monk residing at Fecamp Abbey. Nothing if not audacious, Le Grand claimed Vincelli had served the drink to King Francis I, who on tasting it declared “Foy de gentilhomme! Oncques n’en goustai de meilleur!” (“On my honour! I have never tasted anything better!”). Le Grand’s passion for extravagant marketing lives on today in the Palais Benedictine, a Gothic, Renaissance and Art Nouveau structure completed in 1888 to house a factory, an epic product “history” wrought in stained glass and a vast art collection. The Palais Benedictine remains one of Normandy’s major tourist attractions to this day.

1880sRelentless promotion swiftly sees Benedictine float across the Atlantic and into American cocktail glasses. The 1883 edition of Jerry Thomas’ Bartender’s Guide includes adverts for Benedictine, while by the 1887 edition it sweetens a couple of drinks. Patsy McDonaugh, in his Bar-Keeper’s Guide and Gentleman’s Sideboard Companion of 1883, not only includes Benedictine recipes, but lists the stuff among the four “most popular” cordials a bar should stock. Given Benedictine reaches the United States as the vermouth craze is picking up steam, the two are on course to share a mixing tin eventually.

1916Hugo R Ensslin’s Recipes for Mixed Drinks records the first Chrysanthemum, albeit a sweetish formula with equal parts vermouth and Benedictine. Since Ensslin simply listed recipes without descriptive notes there is no way of knowing if he claimed the drink as his own invention.

1930Harry Craddock’s The Savoy Cocktail Book gives a modified Chrysanthemum, with the Benedictine to vermouth ratio eased back to 1:2. Craddock’s drier version becomes the standard. Craddock further noted that the drink was “well-known and very popular in the American Bar of the SS Europa.” The German cruise liner, freshly launched when Craddock was writing and able to cross the Atlantic in just five days, would have been popular with Americans escaping Prohibition.

Late 1900sThe Chrysanthemum gets resurrected with the cocktail renaissance. Initially just one among an army of obscure drinks dredged out of The Savoy Cocktail Book, it wins favour for its herbaceous qualities – which tie in with the new thirst for exotica like absinthe – as well as for its low alcohol content. Some bartenders take the drink in new directions, such as Jeffery Morganthaler’s experiments with barrel ageing – perhaps an alternative route to the extra-oak flavours of the elusive Benedictine Single Cask?