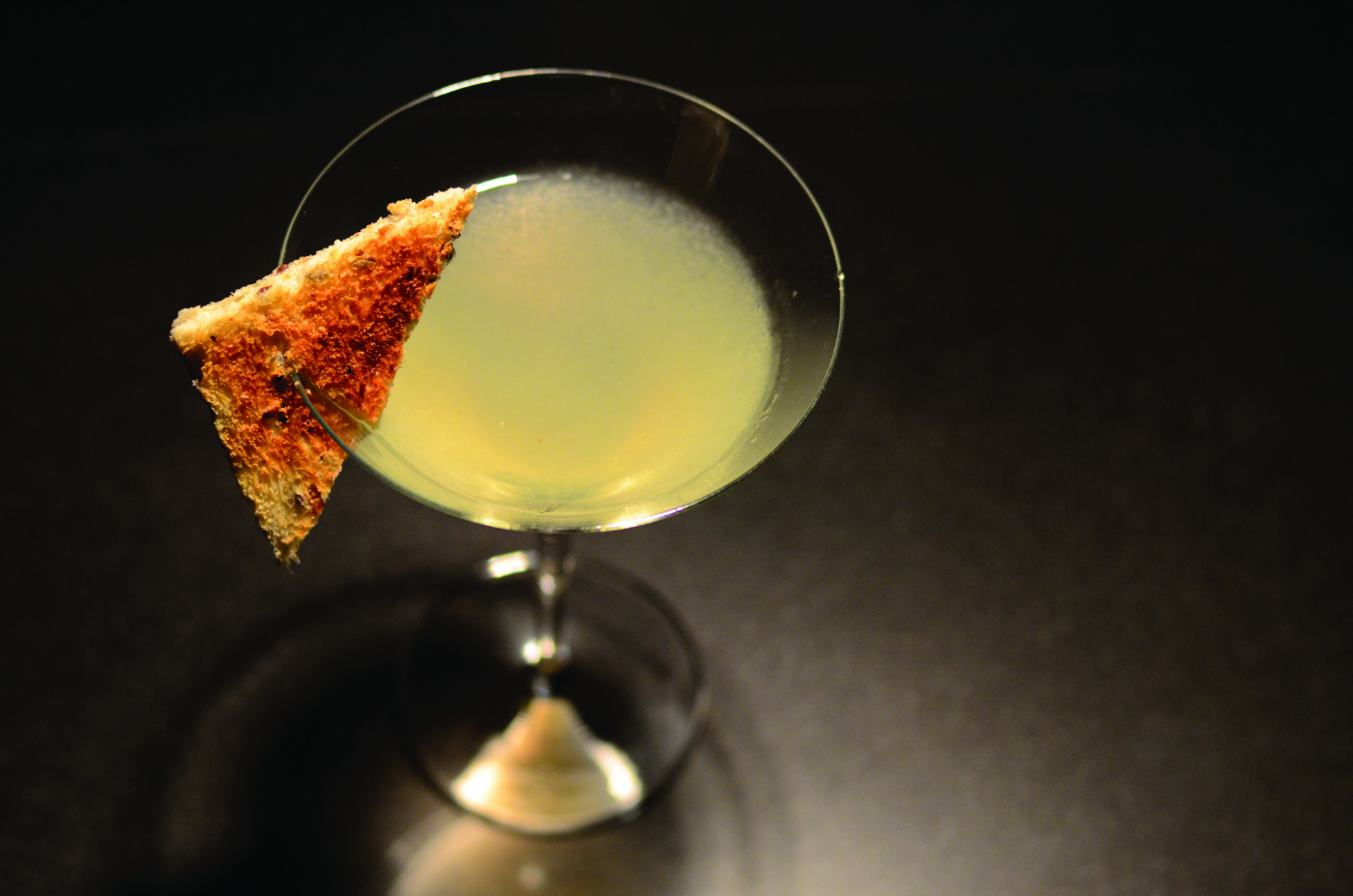 A toast to the bitter orange. By Seamus Harris.

Hard-drinking comedic actor W.C. Fields once famously declared “I must have a drink of breakfast.” The traditional Martini was Fields’ habitual tipple, and a super-sized version concealed in a vacuum flask often helped him through filming. Fields euphemistically called this his “pineapple juice”. Despite cultivating the persona of a grumpy conventionalist, I suspect Fields would have responded favourably if, during an early morning shoot, some wag had surreptitiously spirited a Breakfast Martini into his juice flask.

Few modern drinks deserve the label classics. The Breakfast Martini is an exception. This muddled marmalade sour, bold orange dolloped on an ethereal frame of gin, deftly balances modernity with tradition – plus a smidgen of restorative vitamin C. No one-dimensional flavourtini, the Breakfast Martini takes a couple of contemporary trends and shakes them up into a Roaring Twenties style libation that would have had Harry Craddock smiling. While this drink has spawned plenty of imitators, the original will no doubt outlast them. The measure of a classic is that a good bar understands what is meant when one requests it. In that test, the Breakfast Martini has succeeded admirably.

The Breakfast Martini is one of the few classic cocktails whose origin is not shrouded in mystery. There is no apocryphal story of an eccentric industrialist insisting on marmalade daily at breakfast, developing celiac disease, and thereafter being forced to take marmalade with gin in place of the more conventional toast. In place of such diverting nonsense I offer the true story of a famous Italian’s aversion to breakfast, a fruity yet fruitless intervention by his wife, an abduction and ultimately a happy finale.

Few modern drinks deserve the label classic. The Breakfast Martini is an exception.

Cocktail maestro Salvatore Calabrese claims undisputed inventorship of the drink. The maestro has a long cultivated habit of breakfasting on caffè alone. One day in 1997, the story goes that his wife insisted he at least try some toast with marmalade alongside his morning coffee. Signore Calabrese was highly impressed by the marmalade, albeit not quite as his wife intended, and instantly allowed his mafioso impulses to get the better of him. In his own words: “The zesty, tangy flavour inspired me and I kidnapped the marmalade and took it to work to experiment”. Calabrese dealt to the shanghaied condiment in true wiseguy fashion, leaving his toast unfinished, his wife muttering something unprintable, and his customers in hopeful anticipation.

Who said crime doesn’t pay? The marmalade became the basis of a richly tangy gin sour, rounded out with a splash of Cointreau. Signore Calabrese had scored a hit. Some of the cocktail’s popularity may come from the way it incorporates elements of past, present, and even future. In a decade of vodka-based flavourtinis, the Breakfast Martini helped nudge tippling in a more flavoursome direction by reviving the use of gin. Not just any gin though. Reading the crowd, Mr. Calabrese reached for one of the soft contemporary gins, with their emphasis on light aromatics rather than bracing juniper, and their exotic, often floral, botanicals. An inspiration for the ongoing fad for fruit preserves in drinks, which is part of the broader culinary cocktail trend, the Breakfast Martini deploys this unconventional but flavoursome sweetener to better effect than most. The bitter-sweet edge from the marmalade reinforces the delicate modern gin, and also slyly acknowledges the cocktail’s historical origins as a morning pick-me-up.

The philosophy of pilfering the kitchen to fuel experimentation behind the bar is a cornerstone of the modern school of culinary cocktails. Muddling of exotica like fruit, preserves, herbs and gastriques has become commonplace in the decade or so since Mr. Calabrese liberated his wife’s jar of marmalade. Simplicity tends to be what propels a drink to immortality though, and we can safely bet that few of the culinary creations swarming across menus today will have the longevity of the Breakfast Martini.

Never too early for a drink…

1880s The term “cocktail” first gets slung around, indicating a mixture of bitters and sling – the latter concocted from spirits, sugar and water. Sporty and leisured types enjoy this preparation as a morning eye-opener, accompanying or even substituting for breakfast. From disturbing beginnings, the cocktail is slowly domesticated into the relatively tame beast we know today. Reassuringly modern and perfectly house-trained, the Breakfast Martini still hints at the cocktail’s lively origins.

1930 Noted sauce scribe Harry Craddock writes up the Marmalade Cocktail in his Savoy Cocktail Book. A gin sour sweetened with marmalade, Craddock recommends it as a luncheon aperitif. Sounds suspiciously like boozy breakfast-in-a-glass for the giddy elite to whom traditional mealtimes do not apply. Interestingly, the White Lady, a gin sour sweetened with Cointreau, appears around the same time. The White Lady goes mainstream while the Marmalade Cocktail remains a curious oddity. The Breakfast Martini is an accomplished riff on these two Jazz Age numbers.

1987 The launch of Bombay Sapphire sparks the creation of the premium gin category. The next couple of decades witness a steady trickle of so-called premium gins in a light, modern style. These modern gins tend to be delicately flavoured, cutting back the juniper to give prominence to subtler botanicals, or even to exotic ingredients not traditionally found in gin. Bombay Sapphire is a typical example of the style, offering dry spice, with a distinct liquorice note that sets it apart from its junipery forebears. While Bombay Sapphire combines conventional botanicals in an unusual recipe, other modern-style gins can be more adventurous, reaching for flavours as diverse as cucumber, meadowsweet, rose, violet, vine flowers and water mint. These unconventional botanicals can put a fresh spin on a Breakfast Martini.

1997 Italian maestro Salvatore Calabrese invents the Breakfast Martini while working at the Library Bar of the Lanesborough Hotel in London. This is one of those rare occasions where the true story behind the history leaks out, exposing the world to a lurid tale of irregular breakfast habits and husbandly malfeasance. The marmalade inspired cocktail is tasty enough that drinkers forgive its murky past.

2000s The culinary cocktail movement gets underway, driven by the ethos of exploring the kitchen for new ideas to apply behind the bar. Calabrese’s experiments with marmalade perfectly demonstrate the philosophy behind the movement, and the decade sees imitators concoct their own jam-based cocktails. Many of these new drinks are excellent. Unfortunately, the more exotic the ingredients used, the harder it becomes to recreate a drink off its home turf. Tempting as a Fig and Pistachio Collins may sound, it would require considerable planning for most of us to mix one. The simplicity of the Breakfast Martini, drawing on ingredients stocked in almost any kitchen and bar, is fundamental to its charm.

The Bar Awards Hong Kong announces its Top 10s for 2018