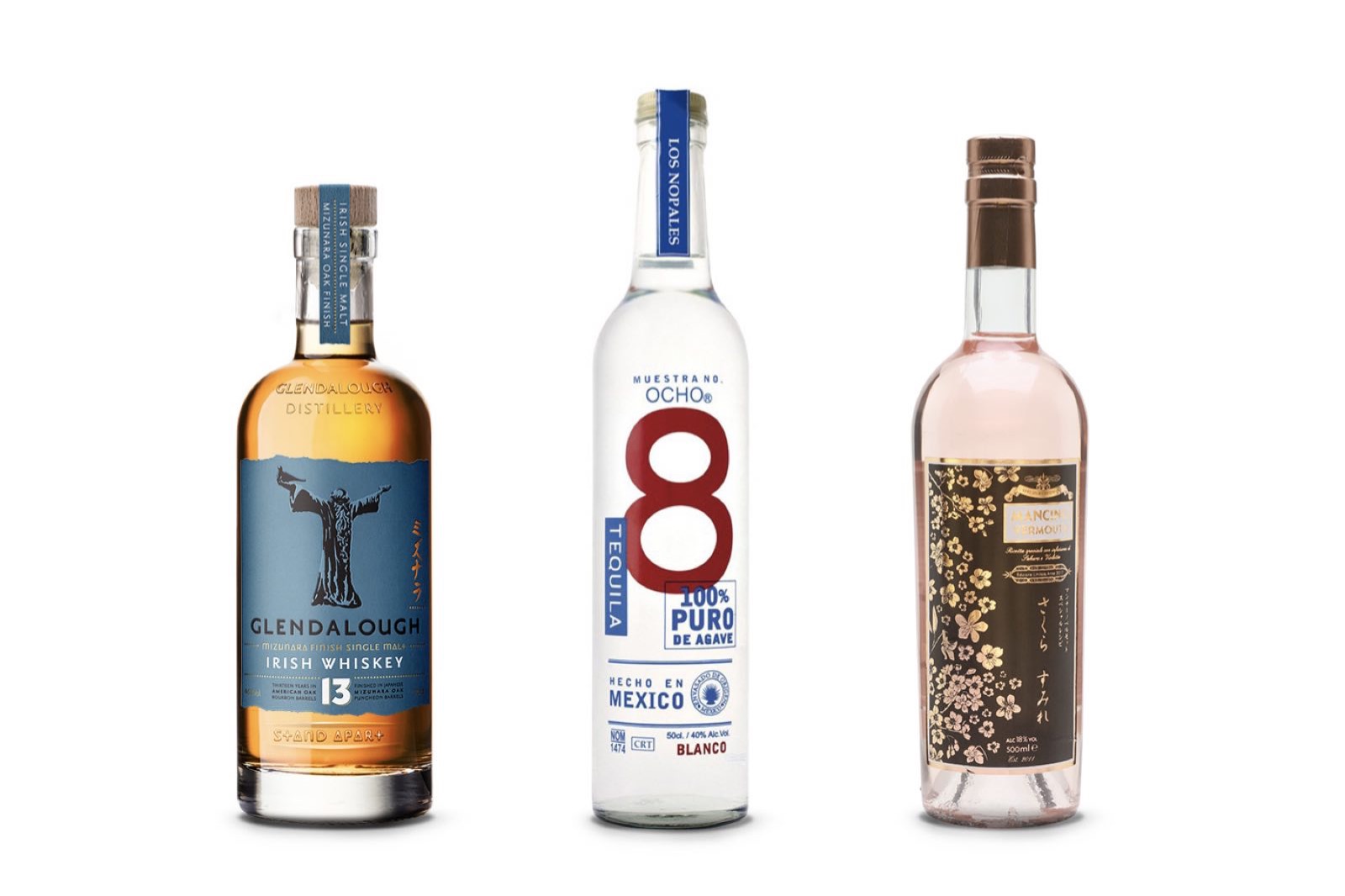 Mancino Sakura Vermouth
Originally produced for the Mandarin Oriental in Tokyo last year, Giancarlo Mancino’s limited edition Sakura Vermouth pays homage to the cherry blossoms people travel the world to see every spring. The recipe, with a trebbiano wine base, features violet petals and cherry blossom and the base is Machino’s bianco vermouth. A gorgeous rose coloured liquid, it’s no surprise that the vermouth has cherry and floral notes on the nose, which also comes through on the palate with a buttery roundness from a cherry marzipan finish. 18 percent abv.
Available from: Hong Kong, Proof & Co (+852 3480 8588); Singapore, Proof & Co (+65 8518 8183)

Glendalough 13 Year Old Mizunara Cask Whiskey
Glendalough, known as “the garden of Ireland”, is located just south of Dublin. The distillery was founded by five friends who left their city jobs to follow a passion and open one of Ireland’s new wave of smaller-scale independent craft distilleries. The Glendalough 13 Year Old Mizunara Cask whiskey is the world’s first and only Irish whiskey finished in Japanese mizunara oak. Hailing from Hokkaido in northern Japan, virgin mizunara is coopered in Miyazaki Prefecture in the south. Not only is it the country’s only independent cooperage, it’s also run by Japan’s oldest cooper. This single malt is made from locally grown and malted barley and no smoke or peat is used in the malting process. It’s double distilled in a copper pot still and aged in first-fill ex-bourbon casks and finished in the mizunara cask. A light caramel colour, the nose has a very distinctive aroma of fresh oak with honeycomb and citrus. On the palate, it’s smooth with rounded fudge notes spiked with marmalade, followed by cinnamon and cloves and long, chocolatey finish. 46 percent abv.
Available from: Hong Kong, Drinks 99 (+852 3591 1044)

Tequila Ocho Blanco Los Nopales
Tequila Ocho is an artisanal, 100 percent agave tequila made by third generation El Tesoro de Don Felipe master distiller Carlos Camarena, in partnership with Tomas Estes, who is recognised as one of the world’s most influential people in the category and acts as a tequila ambassador for the Mexican government. Each year Ocho produces a special Ocho Rancho Unico – a tequila made from the agave plants of just one field to get the full expression of the soil and the agave. This year’s bottling comes from Rancho Los Nopales, which belongs to Camarena’s grandfather, Don Felipe Camarena, and is 2,070 meters above sea level. What sets this rancho apart (and gives it its name) is the wild prickly pear cactuses that grow on its east side, creating a fence. This is the first time in 35 years this land has been used to grow agave and the plants were 6 years and 9 months at harvest with an average sugar content of 27.5 percent. The nose is fresh with hints of cucumber and grapefruit, with green notes akin to cut grass and unripened pineapple. The palate is equally green, with peppery and spicy green bell pepper hints, mellowing out to earthiness on the back. 40 percent abv.
Available from: Hong Kong, Brand Connect (+852-9158-5627)