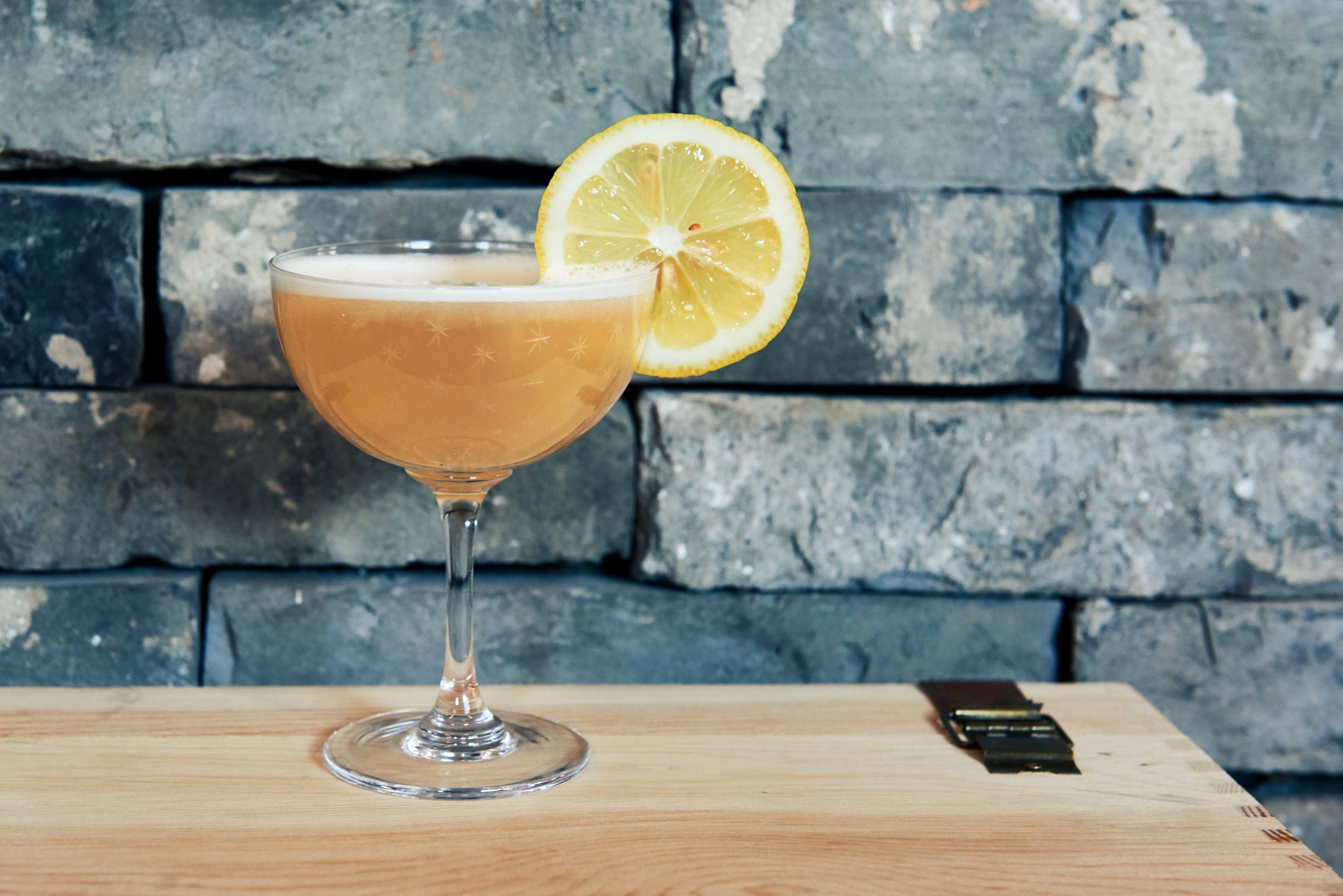 Ship me somewhere east of Suez, where the best is like the worst, Where there aren’t no Ten Commandments an’ a man can raise a thirst
For the Pegu Club is callin’, and it’s there that I would be –
Sippin’ gin and bitters cocktails, lookin’ lazy at the sea

The Pegu Club cocktail is a crisply khakied, pith-helmeted, thoroughly pukka chap, most at home when affably propping up bar in some far-flung locale. With its eccentrically liberal use of bitters and mysterious ability to lure the gin-averse on that revelatory pilgrimage down Juniper Lane, this elixir marks a rare Oriental contribution to the cannon of classic cocktails. Depending on the measure of lime juice, the drink can be considered an equatorial Gin Crusta (less juice) or a perfumed White Lady (more juice). The origins of this exotic yet refined libation appear to lie in Colonial Burma, where it helped to lubricate British rule, mollify the midday sun, and generally bolster delicate English constitutions against the travails of the tropics.

A magical kingdom of golden pagodas, elephants hauling teak, and almond skinned maidens smoking cheroots through ivory teeth, Burma attracted British interest when its warlike Konbaung Dynasty, fresh from defeating Siam and repelling the armies of China’s Qianlong Emperor, marched on Calcutta in a tragic flush of hubris. Britain first panicked, then annexed the kingdom. The Royal Navy seized the port of Rangoon, redcoats inched up the Irrawaddy River to the capital at Mandalay, and King Thibaw was dispatched to a life of comfortable irrelevance in far away Ratnagiri – on India’s Arabian Sea coast. Rangoon, dubbed “the garden city of the East”, became the new capital. Its golden pagodas and traditional wooden buildings were joined by all the infrastructure of a Victorian city, including spacious parks, graceful buildings, and a gentleman’s club named after a nearby river.

As described by Rudyard Kipling in Sea to Sea: “The Pegu Club seemed to be full of men on their way up or down, and the conversation was but an echo of the murmur of conquest far away to the north.” But we are drinkers, not fighters, so what of the club cocktail – the drink which remains famous to this day named after The Pegu Club itself? Sadly, despite promising readers a “Dissertation on Mixed Drinks”, Kipling failed to mention any. I like to think that overindulgence in The Pegu Clubs explains this oversight. So let us tell the story Kipling intended and have a club member introduce the cocktail:

A quick snifter with tiffin? Pukka idea. But first try our mutton: I assure you the Club is the only place in Rangoon where you get mutton. Hi, boy! Bring master a cocktail. Now our cocktail is unique in using two sorts of bitters — orange and Trinidad. Useful prophylactic against this heat. See that man over there? He was cut over the head by a dacoit the other day at Zoung-loung-goo. Awfully tough man. Sure you don’t fancy some mutton? Now that chap next to him is going home on sick leave — got a lump of iron somewhere in his system. Ah! Here come our drinks! You’ll find the orange tempers the gin, not that straight gin ever harmed a man. I don’t entirely care for the lime – native fruit. Mind you, our barman, a Madrassi lad, he only adds a drop. The gin is a steriliser. Perfectly safe. The bitters are the key. HIGHLY medicinal. We’d better have another round. That jungle fighting is the deuce and all. More ice please.

I like to be liberal with the bitters. A recent and unfortunate recent trend is to omit the orange bitters. I don’t understand the logic of this simplification. While the orange bitters play a smaller role than the aromatic bitters, they remain essential. The use of two types of bitters makes this drink special.

Higher proof and more junipery gins are especially good here. Strictly speaking the drink should be made with orange curacao, but in  a pinch always choose good triple sec over bad curacao.

The quantities of orange curacao and lime juice can be varied to taste. The above recipe produces a stiffer drink in which the lime and curacao merely accent the gin. This matches the earliest recipes and also my personal preference. However, a more refreshing and less potent mix using more lime and curacao is also pleasant.

This is perhaps the most doggedly pith-helmeted drink to be served up in a cocktail glass. Therefore it seems sensible to chill the glass well (much as one might soak a pith helmet to cool it down) in recognition of the drink’s tropical nature.

1880s The Pegu Club (building) is established in Rangoon. Constructed from teak, the club caters to the British officers and colonial officials posted to Burma following annexation, and who fight a series of bitter conflicts with Burmese rebels. The club is one of the famous gentlemen’s clubs of Asia, on a par with the Tanglin Club in Singapore, the Royal Selangor Club in Kuala Lumpur, and the Shanghai Club. While the evidence is scant, we can assume the club immediately began serving a house cocktail. The original cocktail of the Pegu Club may well have been the drink that carries the name today.

1927 The earliest recorded recipe for the Pegu Club cocktail appears in Barflies and Cocktails, by Harry McElhone of the famous Harry’s New York Bar in Paris. In his Savoy Cocktail Book of 1930, Harry Craddock notes that the Pegu Club “has travelled, and is asked for, around the world.”  Presumably the drink had existed for some time before the first printed mentions.

1941 The original Pegu Club is said to have burned down during a Japanese bombing raid. Following World War Two the club was rebuilt and briefly resumed operations, but the sun was already setting on the British Empire.

Late 20th Century Burmese independence in 1948 saw the Pegu Club’s cocktail shakers hung up for good. Independent Burma had no need for a club catering to British imperialists, and the Pegu Club cocktail faded into obscurity. Travel writer Paul Theroux visited the derelict clubhouse in 1971 but was turned away at the door. Perhaps the most constant reminder of the venerable institution is a bus stop in Rangoon bearing the Pegu Club name.

21st Century The famous Pegu Club bar opens in New York, and its success helps restore the fortunes of its namesake cocktail. The Pegu Club reappears on cocktail lists. Simultaneously, Burma opens up to tourism and business, and the Pegu Club is once again served at historic venues such as the Strand Hotel in Rangoon. Modern bartenders tend to make the drink along the lines of other popular sours, such as the Margarita and Cosmopolitan, meaning more lime juice and curacao than in the earliest recipes.

Besides the Pegu River, lookin’ lazy at the sea,
She’s got ice and limes a-settin’, and I know she thinks o’ me
Sippin’ gin beneath the palm trees, there’s a Burma girl who’ll say,
“Come you back, you British drinker; come you back to Mandalay!”
(With apologies to Rudyard Kipling!)

Get to know: The Singapore Sling