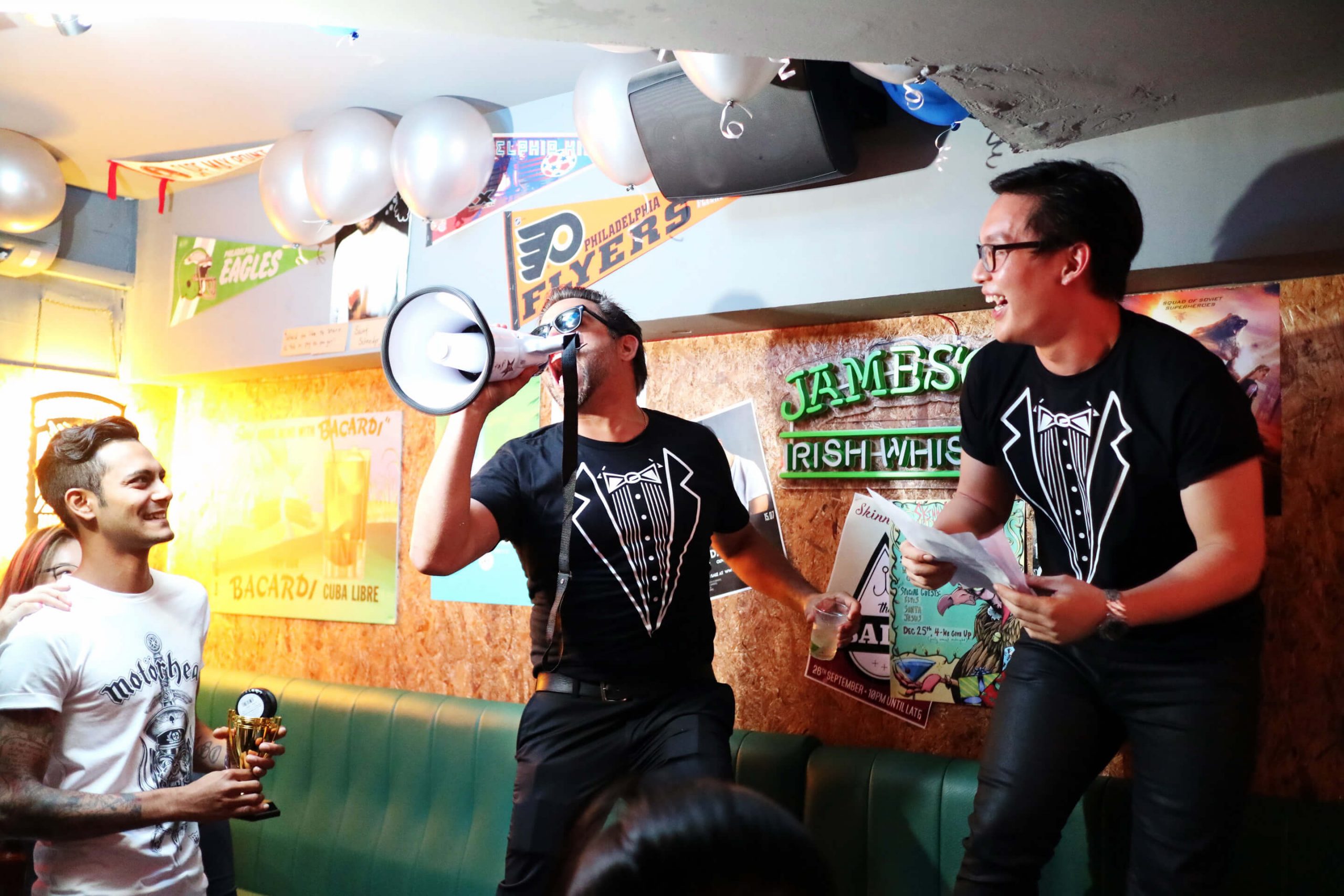 The Bar Awards founder Tron Young in this special report on the industry night for the notorious.

The Singapore bar community gathered on Sunday night to celebrate the lacklustre and pointless work of some of the industry’s more notorious side – and take it from me, founder of the real-deal Bar Awards: There are no winners – but a lot of fun. The Anti Bar Awards, an initiative by Denise Khan Tan, Abhishek Cherian George, Nick Haas, and supported by brand ambassadors Ricky Paiva and Jay Gray, has come back strong in its second year. They even had trophies to give away.

The crowd was raucous and drunk after celebrating Ana Souza’s (The Pontiac HK) win earlier that afternoon at the region’s first Speed Rack Asia. At Skinny’s Lounge, converted into a nightclub for the occasion, the room gathered as the drill sergeant master of ceremonies, Brandon Hon, began his announcements over a loud hailer.

First award up was the much-anticipated Ginger Ninja award. Second place went to Greg Sarnecki but the ultimate prize was awarded to one of the main sponsors, Jay Gray. “You should have been at the sponsor meeting,” explained George when questioned about a partner winning an award.

The Road Runner award was up next, a celebration of those who don’t tend to commit to one workplace for too long. Runner up went to Ruben Kanthan, who is now celebrating the end of his three-month probation at his new work place, Nox. Although the crowd favourite was Loga Raj, the award went to career-hopping vet, yours truly, Tron Young. Most Eastern-European Eastern European went not to an individual, as planned, but The Library’s Central European Czech-Slovak team, proving that bartenders don’t know shit about geography.

The Person Who Just Keeps Coming Back award celebrated those who love farewell parties. The winner, Aaron Goodall, muttered a quick, “I’ll be back,” as an acceptance speech. He did return sooner than expected to pick up his Worst Facial Hair prize, beating write-in nominations like “Ricky has the worst everything”, “Ben ‘Shave that Dumb Shit’ Poh” and second-placed Igor Hadzismajlovic’s handlebar.

Goodall’s two wins was the start of The Cufflink Club’s assault on the Anti Bar Awards. Best Rack – not for the best designed back bar, but for the well-endowed in the chest-tical region – rightly went to Charles Faggotter per his inability to button up his shirts. The bar continued to pick up wins for Most Pretentious Job Titles and Charles claimed his second solo prize for Shittiest Name, much to the surprise and disdain of Igor Haddjksv;ljkn.

And now the moment none of the winners have been waiting for… The full list of winners.

Most Eastern-European Eastern European
Best response: “Can you deport a few? I can’t decide.”
Runner up: Zdenek Kastanek
Winner: The Library

The Zac De Git Award For A Lifetimes’ Dedication To Getting Drunk
Best responses: “I think Zac’s got this one down”, “Sydney Widge”, “Rice [Rhyse] from Sugarhall”.
Runner up: Zac De Git
Winner: All of the Aussies

The Biggest Sellout
Best responses: “Jay Gray should have been a server at a bar where they only use skateboards to move and all wear Run DMC shirts”, “Michael Callahandjob’s Cleo Bachelor of the Year”, “Y’all were sellouts from the beginning”.
Runner up: Cocktail Week
Winner: Cocktail Week

Most Pretentious Job Titles
Best responses: “David Daiquiri Cordoba”, “Someone sent me a CV today with ‘Bar Chef’ on it. F**k right off’, “Are these for real?”.
Runner up: Proof & Co
Winner: The Cufflink Club

Oh You Again (For the bar/establishment/people who keep picking up awards)
Runner up: 28 Hongkong St
Winner: Proof and Co
ABA note: “Same thing isn’t it?”

Congratulations to all of the winners and just like me, your trophy will be hidden deep within the depths of the closet.