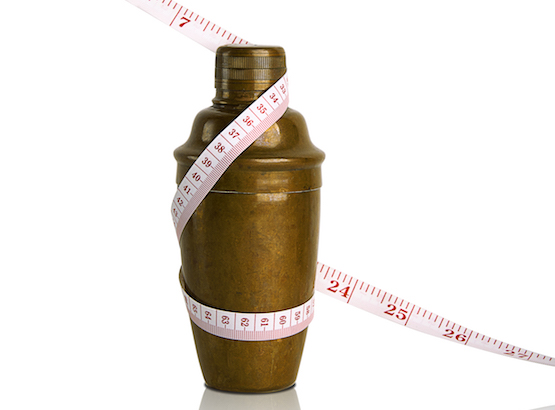 Offering low calorie options doesn’t have to come at the cost of quality. By Paul Mathew.

It is with some degree of trepidation that I approach the subject of low calorie cocktails. Most of the drinks we make as bartenders involve sugar. The earliest definition of a cocktail describes it as a “bittered sling” – that is spirit, citrus, soda and sugar. Two of the earliest cocktails, the Old Fashioned and Sazerac, involve spoonfuls of sugar, and the punch before them used broken lumps of loaf sugar along with plenty of fructose-laden fruit. Then of course, there’s the alcohol. Granulated sugar contains approximately 3.8 calories per gram; alcohol contains seven. Therefore, a standard small 25ml pour of vodka at 40 per cent abv equates to 70 calories. As for other ingredients, for a European liqueur to be classed as such, it must contain over 100g of sugar per litre. For a “creme de” liqueur, that rises to 250g per litre and for creme de cassis it has to be at least 400g per litre – that’s quite a hit of both alcohol and sugar calories.

My apprehension is exacerbated by my experience of diet drinks. My first bartending job (over 22 years ago) was behind the bar of an old pub near my parents’ village. The Gin and Slim (gin and diet tonic) was in full fashion in 1990s Britain, but I couldn’t understand why anyone would put up with the artificial sweetener-fuelled aftertaste for the sake of a few less calories. The other recommended low calorie option at the time was a vodka soda, the drink of choice for lunchtime alcoholics who wanted to hide their afternoon inebriation and booze-breath from colleagues back in the office. Neither alternative filled me with enthusiasm for calorie conscious drinking.

Fast forward to 2011, and in the midst of the modern cocktail revival, low calorie cocktails suddenly became big business. In the USA, reality TV celebrity Bethenny Frankel coined the term “skinny” for a low-calorie margarita, marketing the Skinnygirl Margarita premix in April 2011. Its success led to a whole range of Skinnygirl brand products, from other cocktail premixes (Pina Colada, Cosmopolitan and Mojito for example) through to skinny wine and even vodka. So successful was the brand that Frankel sold it to Beam Global for an estimated USD100-120 million  (¥636-763 million) in 2012. With that sort of success, bars, bartenders and consumers all took notice, and skinny marketing swept America. Jen Queen, bartender and tequila aficionado, was working in San Diego, California, during this time. “The Skinnygirl craze blew up. People would be drinking these cocktails in the spring before beaching – the ‘bikini season’ is a thing as we have so many miles of coastline. Everyone would be ordering tequila and pressed lime, shaken, on the rocks, no salt. We also did sections of our drinks lists with the calories listed.” To date though, the skinny trend has largely remained on US shores, despite predictions every year for the last few years that it will expand (most recently, a UK trends survey in November 2015 predicted that “low-calorie cocktail orders will also increase as more consumers opt for the ‘lighter option’ when it is offered to them”). So assuming consumers do embrace the low-calorie drink, how should we be looking to meet demand?

To reduce the calories, you have three options: you can reduce the amount of sugar, reduce the amount of alcohol – or both. Skinnygirl and other similarly marketed diet brands reduce both, but cunningly. Skinnygirl Bare Naked Vodka for example, is 30 per cent abv compared to a regular 40 per cent spirit. And their wine is 10 per cent abv rather than 13-14 per cent. So yes, less calories, more water. The same goes for many of the other premix products – calories are saved by making the drink weaker. In the case of Skinny Margaritas, replacing the triple sec for agave syrup is often touted as a route to healthier drinking – agave syrup has a low glycaemic index (GI), so causes less of a blood sugar spike than sucrose or glucose sugars (and also removes the alcoholic component of triple sec). However, the reason for this is that it is also around 90 per cent fructose – a sugar that is increasingly being blamed for everything from obesity to diabetes. In terms of calorie counting, it’s not much better either – 3.1 calories per gram to granulated sugar’s 3.8 – though agave syrup can be perceived as tasting sweeter, so less can be used to achieve the same balance in the drink. The agave flavour can also enhance the tequila, hiding the fact that you’re getting less spirit in your drink. There are plenty of other natural sweeteners (such as honey or maple syrup) that you can experiment with too, though calorific impact will remain much the same whether you’re pouring maple syrup, inverted sugar syrup (a mixture of glucose and fructose), glucose or honey. Artificial sweeteners can also be used – but as with my Gin and Slim experiences, the flavour can be far too synthetic for my liking – I have always been of the opinion that if you’re going to drink, you should drink something nice.

Dinah Sanders, author of The Art of the Shim: Low-Alcohol Cocktails to Keep You Level agrees: “Drinking spirits of any kind means taking in dietarily unnecessary calories, so my recommendation is to focus on quality over quantity. There is no point in wasting your allowance on unsatisfying cocktails.” She goes on to identify a major pitfall of low-calories cocktails, particularly in pre-packaged drinks: that the focus is on a low-calorie result rather than tasty drinks. “Many have synthetic aftertastes, which render them much less satisfying than the simplest of alternatives,” she says. “Bars should be highlighting their amazing bitters selections and presentation skills with waistline-friendly offerings like that rather than bringing in pre-packaged junk.”

What are our alternatives? If it’s sugar you’re looking to reduce, there are an increasing number of products that take their sugar and calories seriously, even if it’s not the focus of their marketing. Zero dosage champagnes, for example, offer a very dry alternative to traditional fizz where a “dosage” of grape sugar is added, so swapping them in to sparkling cocktails will help a fraction (and aid perception if nothing else). Premium mixers such as East Imperial tonic water, made to a more traditional recipe and with natural ingredients can also reduce the sugar levels (in East Imperial’s case, they use around half the sugar of some big name tonics) as they don’t need excess citric acid and sugar to enhance the flavour – it’s all there from the botanicals. Some traditionally made Old Tom style gins (such as Jensen’s Old Tom) create the perception of sweetness with their botanicals too (particularly liquorice), so you can reduce the amount of sweetening ingredient you would otherwise use. In general, stay away from syrups, liqueurs and sodas – not to mention dairy creams, egg yolks and chocolate. As Sanders comments, “One thing that approach suggests is that most bars are completely missing the mark when it comes to tailoring drinks for their diet-conscious customers. The average ‘girly drink’ is often quite opposite to those goals.” So if it’s a stiff drink your customer is after, perhaps recommend a Dry Martini (50ml gin plus 10ml dry vermouth, equals 160 calories) over a Tom Collins (50ml gin, 25ml lemon, 25ml simple syrup, equals 195 calories) or a large measure of good tequila on the rocks with a twist of lime (140 calories for 50ml) over a Margarita (around 250 calories, depending on the recipe).

While there are some calories to be saved by reducing sugar (and avoiding dairy), by far the most effective way of reducing the calorie load is going for less alcohol, so simply offering a lighter pour will do the trick – a 25ml gin and East Imperial tonic will come in at under 100 calories versus over 200 for 50ml with regular, while a classically lower alcohol cocktail like the Adonis (50ml dry sherry, 25ml sweet vermouth, orange bitters) or Gaz Regan’s Islander (50ml sweet vermouth, 15ml Islay whisky, dash of absinthe) will also be around the 100 calorie mark. Calorific content of our drinks aside, alcohol is of course an appetite stimulant (the very basis of the aperitif), so if your customers are really looking to cut the calories, maybe suggest they have a night or two on your non-alcoholic creations. Sanders points out: “Cocktails are appetising and intoxication makes everyone more likely to bend the rules of their diet. Drinking skinny all night won’t do you any good if you wind up drunk enough to go for that indulgent midnight snack!” Chuanr anyone?

This article was first published in Issue 41 of DRiNK Magazine China. Subscribe to the magazine here.