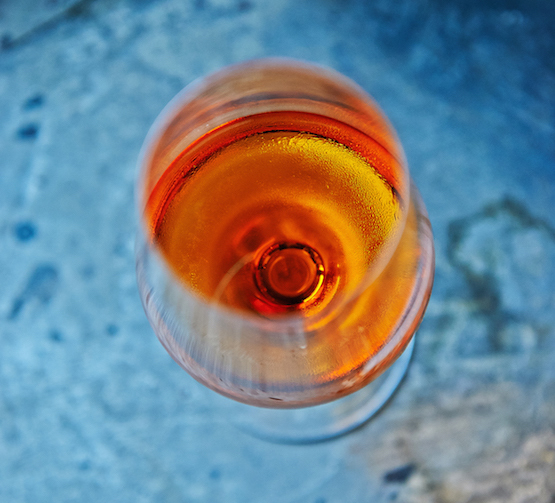 A cult technique of prolonged grape-skin maceration has given rise to one of the most buzzed-about styles in the past year. But are these texturally compelling, sommelier-driven hipster wines worth the hyperbole? By Ned Goodwin.

Is orange wine the new cool? The amount of press and winelist space that it commands from New York to Melbourne, cities where the vinous zeitgeist reverberates, suggests that it may well be. However, the idiom is not exactly new. In fact, while antithetical to the conventional, modern fashion in which white grapes are crushed and-or pressed before the skins are discarded; orange wines are firmly grounded in expressions of wine that hark back to antiquity, still palpable in the deep wine culture of Georgia. Indeed, before colour and clarity in white wines became qualitative tenets attained with modern processing techniques and eschewing of the grape skins, throwing whole grapes and even bunches of grapes into a fermentation vessel was intuitive and thus, the most obvious bloody thing to do when making wine, irrespective of the colour of the grapes.

Today, greater comprehension of the whims of fermentation means that the better wines of the orange tribe are less volatile and overtly oxidative than experimental examples from a couple of decades ago and presumably, far less rugged than the wines of yore. Nevertheless, many are fermented in amphorae or “qvevri”, the Georgian equivalent that are buried in the ground. Handling is often woolly, with minimal if any sulphur dioxide additions, nor temperature control. Clearly, this marks the wines with a distinctive left-of-centre appeal that nevertheless poses challenges to the conventional wine drinker.

Firstly comes the outré hue. Orange wines may see days, weeks and even months macerating with their grape skins where colour compounds known as anthocyanins reside. The resultant wines span a gamut of ambers and fiery coppers, to cider-like ruddy tones and outright orange reminiscent of a liquid Delacroix! Colour is dependent on the personality of the grape variety used and the extent of maceration. For example, pinot grigio – or gris as it is also known – is a chief vehicle for orange wine in the more contemporary stylistic heartland of Friuli-Venezia Giulia. Grigio’s copper skins lend themselves to boldly coloured wines that resemble a light red. In all, most wine drinkers have never seen anything like it.

Yet it is not just colour that derives from the grape skins. Skins also contain a litany of phenolic compounds that bring potential anti-oxidant benefits, tannin, and textural intrigue; not to mention a multitude of aromatic and flavour compounds that imbue complexity and an effusive, giddy joy to the drinker as he or she realises that what was once thought impossible – wines hewn from white grapes that strike a bold pose in their orange gloaming and soaring aromas of ginger, cardamom, turmeric, stone fruits and other exotic spices – is indeed possible! After all, the better wines crafted in a minimally interventionist fashion including orange examples, are frequently capable of inducing epiphanies with their unclad candor. Less makeup and polished perfection is analogous to a greater voice of place, purpose and individuality; a brutal transparency that appeals to some and not others.

Outré? Touché! As Mike Weersing of New Zealand’s pyramid Valley quipped during a recent visit while tasting his magical savagnin rose, “Terroir resides in the skins”. Nodding his head in disillusionment while lamenting the technocratic mandate that deems it acceptable to discard them, Weersing inferred that doing away with grape skins was akin to stripping a wine of its soul. Indeed, recent studies to deter wine fraud have indicated that his beliefs are not far off the mark. Studies including refractometric analyses of finished wines, have elucidated unique microbiological fingerprints hailing from regional specific yeast strains and other microbial activity. Much of this activity foments in grape skins and assists in facilitating the traceability of a wine’s true origins.

Yet, the nitty gritty is that despite conventional drinkers clamouring for comfort and familiarity on one hand, and devilish free spirits embracing difference for its own sake on the other, winemakers must still be capable of shepherding grape to glass in a sensitive manner that maximises the most important qualitative tenets when it comes to enjoying wine-deliciousness and drinkability.

For me, drinkability is defined simply by the visceral urge to drink one glass after another of a wine. In my case, crunchy cru Beaujolais, spiky grenache and lithe Loire reds and lanolin whites, all fit this bill. New Zealand sauvignon blanc, Bordeaux and Napa Valley cabernet largely do not. Nor, sadly, do certain orange wines; especially those that are excessively gritty, tannic and nostril-stinging with their acetic tang. Others, flattened by high pH from grape skin-derived potassium, lack sufficient freshness to balance the greater corpulence inherent to extended skin maceration.

However, it is all too easy to focus on what is wrong rather than what is right with a style that has arrived with sommelier-driven hipster swagger on one hand,、albeit ancient pedigree and true creed on the other. perhaps orange wine’s greatest gift is that it allows us to revel in the sort of imperfections that define real beauty. Thus, let this article serve as a celebration of the best of orange wines. Some of my favourite producers are listed below. While this list is far from comprehensive, these producers craft wines that are compelling in their savoury astringency, with vivid aromas and colours that make you just want to swim in them.

Try patrick Sullivan’s Breakfast Wine from the Yarra Valley, Gareth Belton’s brilliant range of Gentle Folk wines, some ostensibly orange and others… well; his brethren Anton Von klopper’s whimsy with pinot gris at neighbouring Domaine Lucci in the Adelaide Hills; as well, of course, as the mainstays in Friuli and neighbouring Slovenia including radikon, Gravner, Vodopivec, Movia and new kid on the block, Miha Batic. paolo Bea’s mercurial wines from Montefalco are perennially striking, as are the ferruginous wines from New Zealand’s pyramid Valley. Meanwhile, pheasant’s Tears wines are reviving interest in the vinous heritage of Georgia, where it all started.