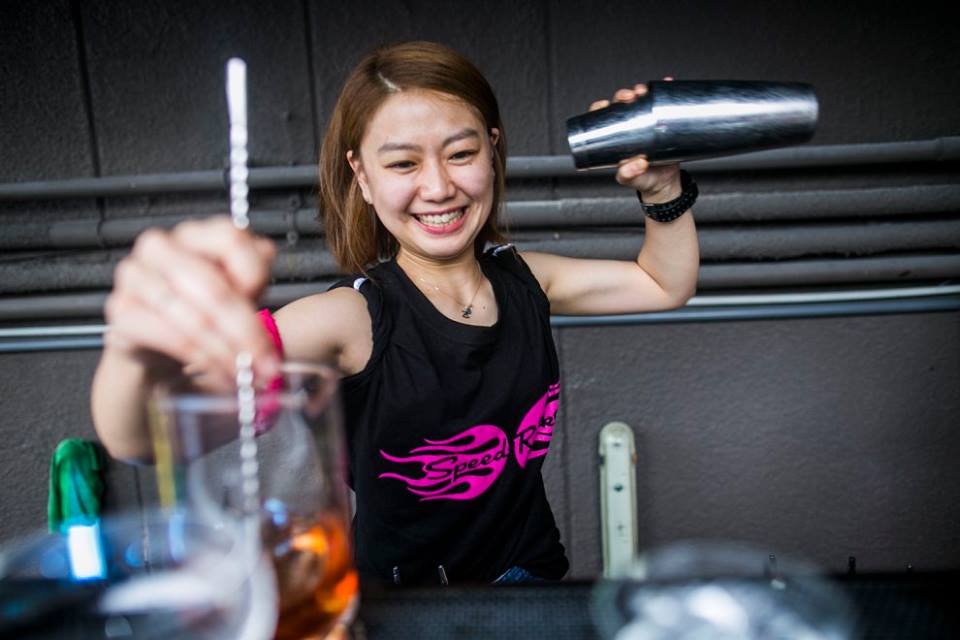 Speed Rack returns to Asia for its second season and first time in Hong Kong. By Holly Graham.

What is Speed Rack?
Speed Rack returns to Asia after two years, this time being held in one of Asia’s cocktail capitals: Hong Kong. The all-female speed bartending competition raises money for breast cancer charity, founded in 2011 by veteran bartenders Lynette Marrero and Ivy Mix – who were recently awarded the Best Bar Mentors and Philanthropy award at this years’ Spirited Awards.

Mix and Marrero founded the competition to shine a spotlight on female bartenders thriving behind bars around the USA while also raising money for breast cancer research, education and prevention. The idea was to create a cocktail competition for the ladies – one that celebrated women, was created by women and supported women both in and out of the spirits industry. This year, the USA had its eighth season and there are Speed Racks happening in countries all over the world including the UK, Mexico, Canada and now Hong Kong.

Speed Rack Asia 2019 competitors will be recruited from Hong Kong with spaces open to women from Macau, China, Singapore, Thailand, Malaysia, Philippines, Japan, Korea, Taiwan, Vietnam and Indonesia. 16 finalists will be chosen and invited to compete for a place in the top eight. The top eight will then compete head to head in round robin style, and the winner will be crowned Miss Speed Rack Asia 2019.

The competition will be held at Duddell’s in Central, Hong Kong on October 27 – during Breast Cancer Awareness Month – so mark your calendars and start booking flights! The event is open to both industry and the public alike, so come and support your favourite bartenders, all in the name of charity.

How to enter (Applications now closed)
Bartenders from Hong Kong, Macau, China, Singapore, Thailand, Malaysia, Philippines, Japan, Korea, Taiwan, Vietnam and Indonesia applied via an online form. The 16 most qualified and talented bartenders from Hong Kong and Asia will be carefully selected from these applications and sent the official Speed Rack spec book of classic cocktails, featuring sponsor brands, an announced here on DRiNK Magazine soon.

What happens if you make the top 16?
The 16 selected bartenders compete in a qualifying round in Hong Kong that tests not only their speed, but also their aptitude in making four cocktails featuring Speed Rack’s presenting sponsors. For competitors outside of Hong Kong, Speed Rack will support with a travel package. The top eight fastest times after penalty adjustments will advance to the on-stage live competition in front of an audience.

And if you make it to the top eight?
The top eight bartenders are then placed into a bracketed round robin style competition. Using sponsors’ products, competitors go head-to-head in instant elimination rounds. They will make a round of cocktails selected at random, taken from a list of 50 spirit industry-standard recipes. The judges then request their selected drink from each competitor and evaluate it based on accuracy, taste and presentation. The swiftest and most skilled women move forward to the next round until the final showdown to crown Ms Speed Rack Asia 2019!

Who will be judging?
Speed Rack Asia judges will be a mix of local and global cocktail experts. Martin Hudak – Mr Black’s global brand ambassador and co-owner of award winning Sydney bar Maybe Sammy – is confirmed as an international judge, with Hong Kong legend Charlene Dawes (the brains behind Quinary, Ori-gin, Room 309, VEA and The Envoy) and Micaela Piccolo – spirits director for Nimbility Asia – returning to judge Asia’s second Speed Rack with one more Hong Kong legend to announce soon.

DRiNK Magazine Asia is the official media partner of Speed Rack Asia 2019, so stay tuned to find out more about the competitors and the competition.