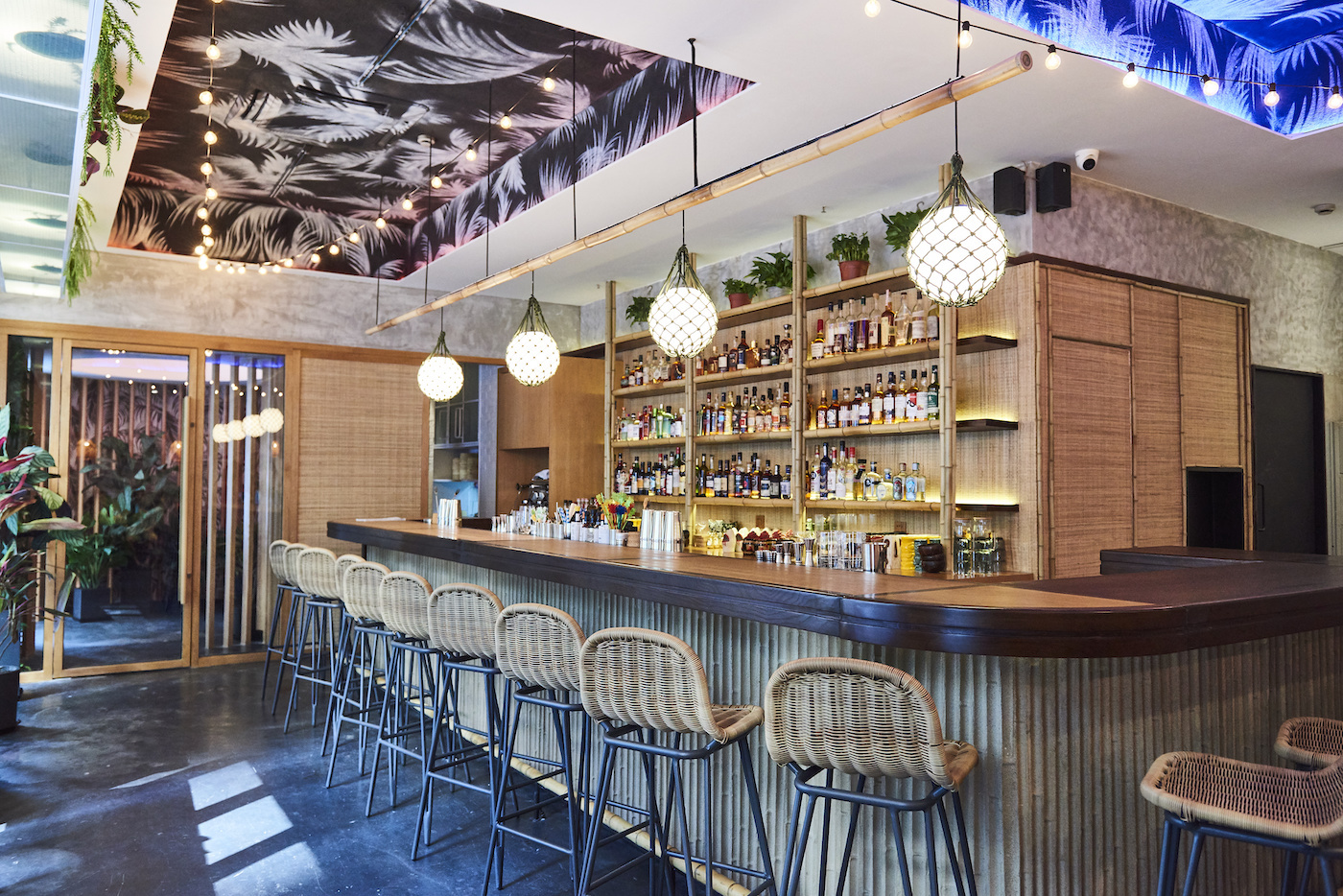 Birds of Paradise offers an escape from city life through a lens of modern tiki – and the duo’s memorable hospitality. By Elysia Bagley.

For Mainland city dwellers, this pretty picture may bring about daydreams of Sanya – as the saying goes, it’s the Hawaii of China, right? Yet so many before you have made the trip down south to leave behind the grind, only to find all those visions of a sun kissed paradise shattered upon the shore with the discovery that the revered island isn’t a retreat from the chaos – it’s actually kind of like being on the metro at rush hour, except with sand under your feet. What the saying surmises, it doesn’t deliver.

But in Shanghai, all hope is not lost, with a new urban oasis in the concrete jungle: Birds of Paradise.

Amidst a clashing collection of fantastically gaudy floral button downs, fresh banana Daiquiris in orchid-adorned coconut bowls and stacks of crispy fermented pineapple chicken wings, its own slogan – island eats and tropical drinks – keeps its promise of whisking you away. That escape from the stressful existence that is first-tier city life is what Yao Lu and Austin Hu have set out to give their guests… if only for a couple of rum-soaked hours.

Those familiar with China and Asia’s bar map know and love the bartender and chef duo’s first project together, The Union Trading Company, which holds down the number 30 spot on Asia’s 50 Best Bars list. With a foundation in classic Americana and old-fashioned hospitality, Union introduced Shanghai to the quintessential neighbourhood bar, where guests become friends become family and creative takes on timeless food and drink stamp out the need to ride trends. Nearly five (very strong) years after its opening, the business partners say it’s about time to pursue something fresh.

From the big list of concepts that the two hope to roll out over the years, modern tiki felt like the right model for the local market, and one with very few limits across all aspects of it. They knew that any concept they chose needed equal potential for both the food and the drinks, and with room for classics and interpretations alike on both sides – for them, it was an obvious choice. But that doesn’t mean you should shove this venue into the tiki bar category. It’s more of an homage to everything they love about tiki.

We want this to be the island oasis in a concrete jungle / We’re not tiki purists. Our bar’s not going to look like a pirate theme park

“We’re being very careful about using the word tiki, and will always use it with modern,” explains Austin. “It’s a framework, a reference; a starting point from things that people love, and then we’re doing the Yao-Austin version of things.”

In their eyes, tiki is a very identifiable culture for anyone and everyone, and, in reality, being a made-up culture to begin with, there’s a lot of room to play. “I’m going to throw it out there right now: we’re not tiki purists,” Yao declares. “Our bar’s not going to look like a pirate theme park – that’s not what we want to do.” And that, again, is why they’re hesitant to even call it tiki without the word modern in front of it, so as to avoid preconceptions – tropical bar is more appropriate.

And on that note, is there such a thing as authentic tiki, anyway? “For the cocktail nerds out there, when people say tiki, it’s purely defined by an American perspective of Polynesian culture,” says Yao. Let’s face it – nowadays, calling anything authentic begs for criticism. “I think especially when it comes to food and beverage, evolution is such an important thing,” Yao continues. “When it comes to ‘authenticity’, how do you go about respecting culture and history without being exactly that?” Upon discussing it thoroughly amongst themselves and with other friends, he and Austin came to a conclusion: tiki culture itself is so intriguing to other people because, really, it’s happy escapism. “One of the core reasons tiki exists is for the escapism – we want this to be the island oasis in a concrete jungle,” says Austin. “As operators, we always want to give people something they can’t make at home and that they don’t see everywhere else. It’s one of a kind in Shanghai right now – there’s no classic or modern tiki, and that’s too bad, because it’s super fun.” And on that note, these are not things you can make at home – Birds of Paradise delivers on that goal with everything you’d expect from the two industry heavy hitters. And they’re right – it’s a blast.

To start, the drinks are wild, delightfully simple but simultaneously complex, and sometimes just plain silly. Forget vessels, and think hermit crabs, sharks, tiki totems, coconuts, you name it. With help from bar manager Lucky Huang – who made a name for herself in Shanghai’s bar scene from the heart of the Union team – Yao’s approach comes by way of lesser-known tiki classics and just as many signatures, all designed around the cocktail sub genre’s three normally recognised elements: spirit (usually, but not always, rum), some format of fruit, and some format of spice. The key word here is format. “What we like to do is when we define the base spirit, define fruit, define spices, we’re considering what format they come in, and then manipulating that and going for what’s hard to find under those things. We’re having a lot of fun with it.” With Southeast Asian flavours being a big part of the menu, ingredients such as Chinese hawthorn feature. Is it a tropical fruit you expect in tiki? No. But it’s a fruit. And from that, they’ve made a hawthorn jam as part of a signature. Likewise, the bar has a house-made orgeat program, with one version going into namesake cocktail Birds of Paradise, a kind of of Pina Colada twist using pistachio orgeat. Overall, of course, every drink comes with some pertinent tiki theatrics.

In Austin’s kitchen there are brilliant interpretations of cuisine from Polynesian and Pacific rim cultures, with help on the menu coming from well-known Shanghai chefs Anna Bautista and Sean Jorgenson – it’s the A-team in the kitchen. For Austin, big flavour drinks need big flavour food: “It’s a little bit messy, a bit little brash – both in the best possible way, I think.” From Spam katsu sliders (Spam is a Hawaiian favourite) to contemporary teriyaki and what Austin calls “raw fish applications” (loose versions of pokes, for instance), dishes are very shareable and sociable, and food is available all day. Plus, modern island breakfast and a soft-serve ice cream machine are in the venue’s future.

When it comes to food and beverage, evolution is such an important thing

Even though Yao and Austin aren’t shying away from the obviously a wacky and ridiculous side to Birds of Paradise, and tiki in general, they still want it to be a neighbourhood bar, emphasising that it’s always about hospitality. Coming from backgrounds in American hospitality, after all, is what the two have always shared. “We’re not making you wear a coconut bra and dance to Tiny Bubbles when you walk in,” says Austin. “The spirit of what we believe in, in terms of hospitality as an overall sense, is very much in place – right now it just happens to be through the voice box of modern island culture.”

For them, that idea of escapism is inherent in the very act of going to a restaurant or bar itself, and like a good neighbour, they’re there for you no matter what you need. “People come for different reasons – they’re happy, they’re sad; they’re ecstatic, they’re depressed,” says Yao. “If you do well, if you have a good project, if you have a good establishment, they walk out happier than when they came in. And that, effectively, is our job – at the end of the day, it’s what we do for a living.”

The goal, ultimately, is to provide a memorable experience (or not really memorable, depending on what you drink, they say) that may not come with every bar you visit – a little wild, a little happy, a lot of fun.

This is obviously not Union 2.0, and they never wanted that – for Austin and Yao, there’s no challenge in replication. Union was always meant to be a standalone concept, and they feel lucky, and proud, that they succeeded in making it what they always wanted it to be. Yet as the founders of such an iconic Shanghai establishment that’s very much its own, the two have gotten a lot of the same response when people hear whispers of “tiki” – it seems a big step away from what they’re known for. But they say really, it’s not.

“At the end of the day, strip away everything else, Yao and I just want to build something that’s good at what it is – it gives you great food and drink. Tiki is a very important detail in this specific case, but it’s still secondary to our primary goal, which is giving good hospitality. That’s the spirit of it. It’s why Yao and I became friends, it’s why we talked about it forever ago, when we first met, and it’s why we’re still friends and partners today.”