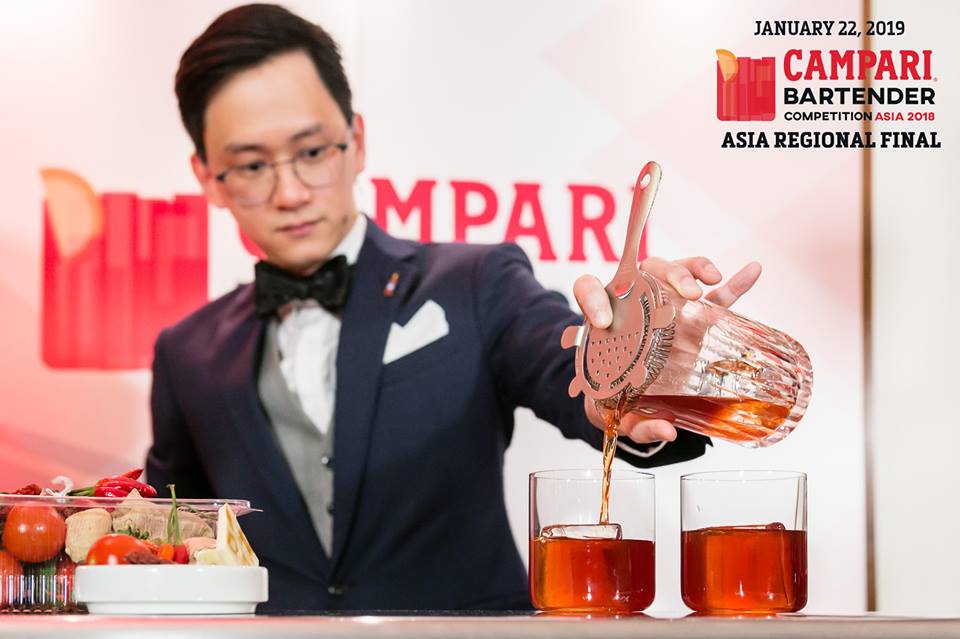 This article is sponsored by Campari

The champion from Thailand shares his experiences in Milan and the inspiration behind his winning cocktails.

After battling his way through several rounds and a final throw down in Milan, Supawit ‘Palm’ Muttarattana, group bar manager of Bangkok’s Foodie Collection – which includes Vesper, one of Asia’s 50 Best Bars, under its umbrella – was crowned the first ever winner of Campari Bartender Competition Asia at the end of January.

In Milan, Palm started things off at the semi-finals with his cocktail Lunga Vita, which bagged him a top three spot and put him head to head against Mars Chang (Asia49, Taipei) and Heather Cheng (Duddell’s, Hong Kong), who scooped second and third place respectively. Meaning “long life” in Italian, Lunga Vita was created to celebrate 100 years of Negroni, using Campari, Bulldog Gin, Cinzano 1757 Rosso, espresso and tonka bean. He first revealed the drink as part of his special Campari menu created for round two in Thailand, along with two other drinks: Tricolore and Bel Paesa. Inspired by the Italian flag’s colours of green, white and red, Tricolore combined Thai and Italian flavours via beetroot, lemon, kaffir lime and coconut together with Cinzano Bianco and Campari. His third drink, Bel Paese, or “beautiful country” – a commonly used nickname for Italy – was based on Campari’s signature Campari Soda. Using an RTD bottle format, it featured Campari and Cinzano dry and bianco, with carbonated water and osmanthus tea.

After the semi-finals, the three finalists were tasked with creating a cocktail inspired by a piece of art from the Campari Museum, using ingredients sourced at a local market. It was this cocktail, Dito al Cieolo – “point to the sky” – that saw Palm win the top spot in the finals. His inspiration was a vintage poster created by Leonetto Cappiello, with two clowns standing back to back. One is holding a bottle of Campari Bitters and the other a bottle of Campari Cordial, with both using their free hand to point to the sky.  So why this poster? “In Italian, the phrase toccare il cielo con un dito (“touch the sky with your hand”) exemplifies the feeling of being very happy,” he explains. “At the end of the day, the most important thing to me is for everyone to enjoy my drink and be happy.”

To create his cocktail, Palm headed to the fresh market with a €150 budget, alongside his tutor, Alessandro Pitant (Campari Bartender Competition 2017 winner). There, he chose white chocolate, ginger, strawberries, sundried tomatoes and chillies. Despite knowing the ingredients, he says it called for a lot of improvisation: “Some of the ingredients – like ginger and chillies – are available in both countries, but they tasted completely different. Plus, €150 Euros may seem like a lot for two cocktail servings, but, I had to buy everything, including ingredients, garnish, glassware, etc – so in reality, I had to be relatively tight with the cash!” he shared. “I was lucky to have Alessandro as my tutor – he always gave thoughtful feedback, and it was fun hanging out with him.”

With his purchased ingredients, Palm created the winning Dito al Cieolo by infusing Cinzano 1757 Bianco with white chocolate and ginger to represent the white clown, while for the red clown, he infused Bulldog Gin with strawberry, sun dried tomato and chillies. A final touch of Averna Amaro represented the shadow cast by the pair. Palm speaks fondly of his fellow competitors from both the semi-finals and the final, dubbing them all “heroes”. “We shared every moment together,” he says. “Everyone was really strong with great skills, personality and presentations. The semi-final round was so intense – it was impossible to tell who would make it to the final round.” Palm says one person that stood out for him was Heather Cheng, representing Hong Kong. “Her presentation was exceptional. I had already watched her first-round presentation in Hong Kong on Facebook Live and was really impressed.”

At the end of the day, the most important thing to me is for everyone to enjoy my drink and be happy

While the competition was intense, Palm was a huge fan of Milan, describing the trip as one of the greatest events in his life. “It’s been my dream destination since I started my career as a barista 10 years ago, and I had unforgettable experiences visiting the Campari Academy, Galleria Campari and legendary bar Camparino.” Palm admits he’s always had a passion for Italian food and coffee, and so having a chance to experience authentic Italian cuisine and drinks was paradise for him. “I drank like five or six espressos a day, and ate as much prosciutto, salami, parmigiano, carbonara, bistecca and gelato as I could, and plenty of aperitivo! I didn’t care about gaining extra weight at all.”

So, what advice does Palm have for bartenders who want to enter the next Campari Bartender Asia, apart from a pre-trip diet? “If you stay focussed and make the most of each day, it’ll eventually pay off. You will gradually become the better version of yourself.” Wise words from the champ.