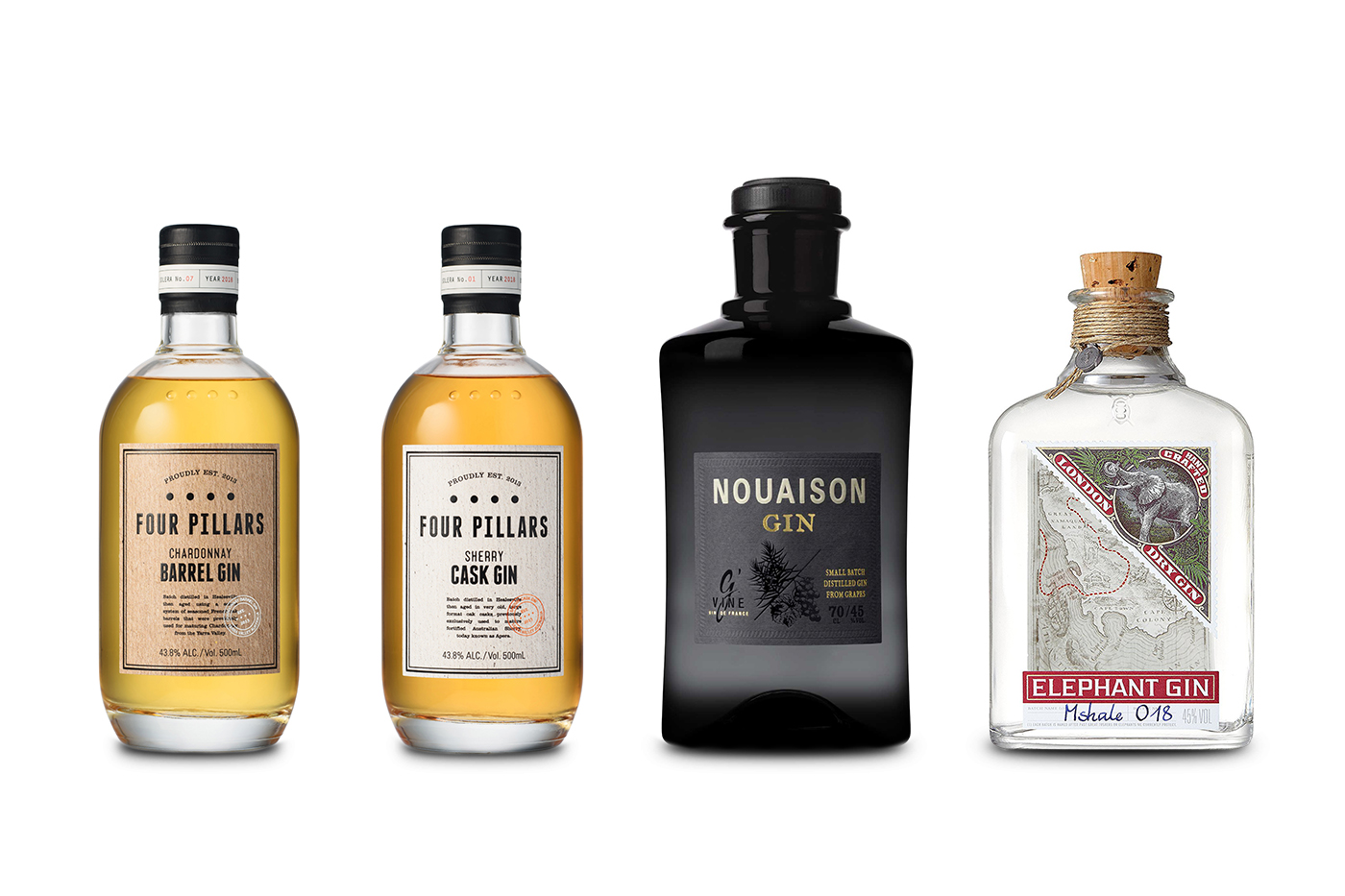 Our monthly product round-up of new bottles in Asia gets the gin treatment for May. By Holly Graham.

Four Pillars Chardonnay Barrel and Sherry Cask gin
Four Pillars was founded in 2013 in Australia by three friends who sold their first signature dry gin through a crowdfunding campaign. After a road trip along the west coast of the United States, to explore different distilling techniques, the team discerned that all the gins they liked most had been made in a Carl still, from Germany. So they purchased their own custom-built still from Carl, able to deliver a very pure distillate at 93.5 percent abv, which is then diluted for bottling. The brand’s gins are characterised by two native botanicals – Tasmanian pepperberry and lemon myrtle – plus fresh Australian oranges (skin and flesh), which are put into a botanical basket inside the still. The rest of the core botanicals are: cassia, star anise, cardamom, coriander seed, lavender, angelica root and of course juniper.

As well as their four standard bottlings, the barrel-aged range includes Chardonnay Barrel Gin and Sherry Cask gin. The first uses barrels that previously matured Yarra Valley chardonnay for six to eight years. The gin rests in the oak for a year, changing the botanical oils significantly: on the nose, there’s spicy notes rounded out by fragrant jasmine and a hint of toffee; in the mouth, the cardamom creates a gingerbread-like flavour, with preserved lemon and a slight saltiness followed by a dry finish. The oak makes the gin a light gold in colour and gives it sweetness and texture, which would make a great highball – or lose the soda and simply sip on the rocks. The Sherry Cask meanwhile was made with 42 sherry and Australian fortified wine barrels, which date between 15-35 years ago, which the distillery arranged into a solera system. Filled with dry gin and a small amount of Spanish amontillado sherry at the top, the aged gin is then bottled from the bottom row of barrels after a year – and this is the first release. More golden in colour than the chardonnay barrel, the gin boasts a distinct sherry aroma on the nose and in the mouth. Hints of star anise, dried fruit and nuts are lengthened and sweetened due to the additional sherry. Much like the chardonnay barrel, this gin would work well on the rocks – or would make a great Tuxedo. Both 43.8 per cent abv.
Available from: Hong Kong, Northeast Wine & Spirits (+852 2873 5733), Singapore, Brand Connect (justin(at)brandconnect.asia)

G’Vine Nouaison gin
G’Vine’s updated recipe for its Nouaison gin also has as sleek new bottle design and was launched late last year in London and Paris, as well as Singapore’s gin haven, Atlas. Founded by Jean-Sebastien Robicquet and produced in Cognac, France, G’Vine Nouaison uses ugni blanc grapes commonly used to produce cognac, along with 14 carefully selected botanicals including sandalwood, bergamot, prune, vetiveria and java pepper, distilled in small batches in a charentais style pot still. On the nose, there’s a refreshing mintiness and a hint of blueberry. On the mouth, the sandalwood hits at the front, followed by citrus and bergamot notes, rounded by a smooth spiciness. Cocktail-wise, the Nouaison would work perfectly in a Negroni. 45 per cent abv.
Available from: Hong Kong, Brand Connect (+852 9158 5627), Singapore, Brand Connect (+65 85048551), Thailand, Brand Connect (+66 2 237 5224)

Elephant Gin
Created by three friends inspired by the wildlife and sundowner drinking habits of their travels in Africa, this gin is distilled in Germany and features 14 botanicals, including five from Africa: buchu (blackcurrant flavours, according to Elephant’s own notes), baobab (sharp citrus), lion’s tail (herbs), African wormwood (bitterness) and devil’s claw (aromatic bitterness). The curiosities don’t stop there: lesser-known gin-gredients abound, with ginger, pimento, elderflower, lavender, fresh apples and pine needles all in the mix, among other more typical botanicals (although interestingly Elephant doesn’t contain coriander, orris or angelica). On the nose: grapefruit, pomelo, fresh pine, crisp morning air upon a mountain. Taste: sweet citrus, fresh pink grapefruit and blood orange, with lingering juniper and spice. Given the South African sundowner of choice would be the gin and tonic, start with that (preferably with a botanical-forward tonic such as Fever Tree’s Mediterranean). And the great news is that 15 per cent of the gin’s profits go to two charities protecting elephants, Big Life and Space for Elephants. 45 per cent abv.
Available from: Hong Kong, Proof & Co (+852 3480 8588); Singapore, Proof & Co (+65 8518 8183)