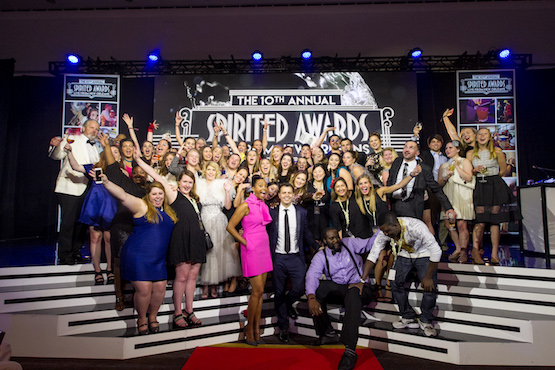 The 10th annual Spirited Awards took place as the climax of Tales of the Cocktail at the end of last month, and as ever it was a chance for the global bar industry to give itself a well-deserved pat on the back after the end of another triumphant week. Here’s what we learned during the lavish ceremony at The Sheraton, New Orleans on July 23.

1 There were plenty of high spirits.
Outgoing chairman (and co-host) of the Spirited Awards Simon Ford wasn’t quite ready to relinquish his grip on the host side of his role and made a strong claim to return to the stage next year. His jokes may have been slightly outdone by professional comedian (and owner of pre-batched cocktails, Courage and Stone) Aisha Tyler. But the jokes came thick and fast, and lasted throughout the night, with special mentions for the two most bizarre things in bars over the last year: vagina beer and the twerk shaker.

2 #spiritedawardssolondon
That was Ford’s joke on the night as London ran away with most of the international categories that were up for grabs. It was a joke he felt he needed to make given the amount of scrutiny that the Spirited Awards come under on social media (and the willingness of many in the industry to publicly broadcast their opinions-slash-conspiracy theories). It also wasn’t true – there was lots of recognition among the shortlists for places outside of London and New York, and plenty of other winners in the US, with Portland, San Francisco, Las Vegas and Miami Beach taking awards.

3 This industry is truly global.
OK, so technically only Ueno-san won an award – and deservedly so for International Bartender of the Year – outside of the London/US bubble, but many of the winners who now call either London or the US their home have come from across the globe to get there. Asia (and Australasia) had a good many nominations among the four-spot shortlists too. The internationalism was typified by Max Warner’s award for Best International Brand Ambassador, where he was cheered on by the multinational Beach Brothers team who had won the Chivas Masters crown in Shanghai in June. The Beach Brothers also made drinks before the awards began.

4 There’s a whole lot of love among our community.
From winners dedicating their awards to their wives and partners, to the love shown for the full time Tales of the Cocktail staff by founders Ann and Paul G Tuennerman, to the respect shown by everyone to the cocktail apprentices (CAPS) who had made the drinks throughout the week, this was a show of support within the industry that was capped off by the rousing applause that greeted every winner.

Stage invasions for Herbs and Rye in Las Vegas (Best American High Volume Cocktail Bar) and Stiggins’ Fancy Plantation Pineapple Rum (Best New Spirit or Cocktail Ingredient) – which was initially a small batch made for the CAPS, as it still says on the bottle – really took the roof off. The Spirited Awards really are a night of appreciation for the industry, and one that is well deserved.

5 … And a whole lot of laughter.
Aside from the hosts, some of the guest presenters had their moments too. Cocktail Maestro Salvatore Calabrese took it upon himself to ad-lib in his own inimitable Italian style, former Artesian pair Simone Caporale and Alex Kratena showed they have a future as a comedy double act and Ian “Rum Ambassador” Burrell’s past as a reggae MC was exposed to the world.

6 But a time for tears too.
When New York Times writer Robert Simonson eloquently announced the Lifetime Achievement Award for the late, great Sasha Petraske, the ballroom fell silent, a video of Sasha’s life and times as a bartender captivated the crowd before his widow, Georgette Moger-Petraske accepted the award with an emotional speech to several standing ovations.

This is an industry that loses too many, too young, as was immediately acknowledged by Simon Ford as he led tribute to those who had passed since the last Spirited Awards. This was a theme touched upon by the Cocktail Lovers when they dedicated their award for Best Cocktail and Spirits Publication to influential English bartender Dick Bradsell.

7 “Your job is to dispense happiness.”
The words of Aisha Tyler on the night and a truth that should be universally acknowledged among the global bartending community. Should you take those words to heart then it could be you collecting a Spirited Award in the near future.

8 But you people really should be at work.
The message delivered on behalf of double winner Jeffrey Morgenthaler, who was unable to make it because he was doing his job. His question was, how can any serious bartender spend the busiest night of their week at the Spirited Awards?

A Crocodile Dilemma by Yao Lu